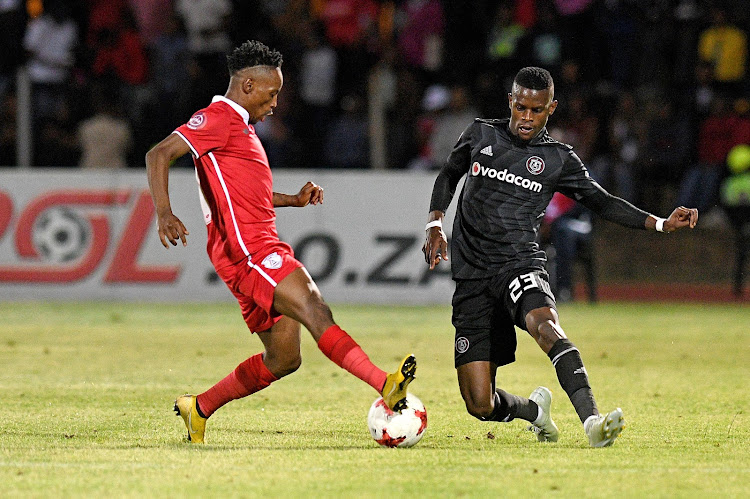 Orlando Pirates' second-half fragility is not quite yet a thing of the past.

The Buccaneers again swept aside their opposition in a convincing first half, then were less impressive in the second before a late goal for an ultimately convincing 3-1 Absa Premiership scoreline against Free State Stars.

Bucs cantered to a 2-0 lead by the break with goals by Thembinkosi Lorch in the 14th minute and Justin Shonga in the 28th.

Pirates captain Happy Jele's own goal just back from the break in the 53rd set up a nervy last 40 minutes for Bucs.

Stars winger Sinethemba Jantjie looked to be a man auditioning to be signed by Pirates and was a notable thorn in the foot for the Buccaneers, especially, as they at times endured a Stars onslaught limping through the second half.

Stars were reduced to 10 men right at the end, in the 88th, with a straight red from referee Daniel Bennett to freshly-introduced substitute Dennis Masina for an over-the-top challenge on Mpho Makola.

Linda Mntambo's 92nd-minute third for Bucs sealed what, in the end, was another good league win for the PSL leaders.

This match would always be interesting to see how Pirates dealt with the bitter disappointment of the weekend's penalties Telkom Knockout final defeat against Baroka FC.

Not just Bucs came out appearing to have a point to prove, and a recent unpleasant memory to bury - their two men who missed spot-kicks in that shootout, Lorch and Shonga, were both on the scoresheet in Pirates' 2-0 lead by the break.

Pirates opened the scoring with a cleverly-worked free-kick from the training ground.

Shonga, standing over the ball to the right of the area, was expected to cross put pulled a low pass behind the defensive line to find the unnoticed backwards run of Lorch, who picked his spot past Ali Sangare.

The score went to double in double the minutes. It was Jantjie who was dispossessed by Marcelo da Silva, who passed ahead to Augustine Mulenga, who fed inside for Shonga to beat Patrick Phungwayo and finish.

Stars, whatever their form, never lie down on their home ground. And Pirates have been notoriously brittle in the second half at times this season.

They pulled a goal back - a result of an own goal by Bucs, but also their own pressure applied. Jantjie's cross was awkwardly just behind Jele and turned into his own goal off the legs of Bucs' captain.

Jantjie - in some ways a one-man show, though also ably supported by the workrate of his teammates - then drove onto the right upright. The winger then struck powerfully on the half-volley, just a diving Siyabonga Mpontshane doing well to hold.

Two minutes into added time Mulenga beat Rooi Mahamutsa, Mntambo took the ball off his own player, advanced and chipped over Sangare.