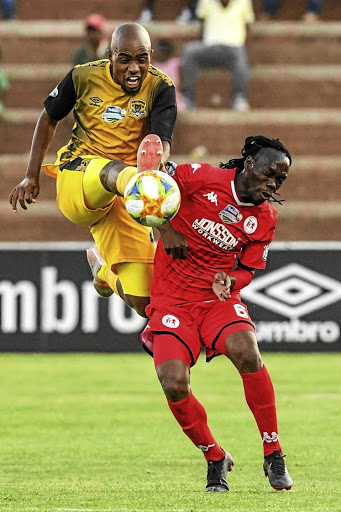 In the wake of his costly own goal against Orlando Pirates on Sunday, Black Leopards midfielder Thabiso Mokoena is finding it difficult to accept the blunder.

A source close to the player told Sowetan yesterday that Mokoena has not been himself after the howler.

"He has been struggling this week and he has not been talking to anyone about it. This thing is eating him."

Before revealing that the club had barred them from speaking to the media, Mokoena said: "Scoring [an] own goal is part of football, I know that."

Leopards coach Alan Clark has come out in support of the midfielder after his blunder gave Pirates a 1-0 victory.

The match at the Thohoyandou Stadium looked destined for a goalless draw until Mokoena, who came on late in the match, turned a Vincent Pule cross into his own net in injury time.

"I think he could have done differently in that situation to prevent that," Clark said yesterday. "But it is not even an issue for us. I think it is very hard for people to blame him for something like that. It's quite disturbing to hear the opposition also carrying on how they won the game. That's a fluke goal.

"It is like maybe they planned it at training. Maybe the analyst can put it on Twitter how many times they scored those kinds of goals at training. The way the technical team's talking is like it happens every week for them. They had no other chances but celebrated like they planned to win that way, it's crazy."

Lidoda Duvha are 14th on the log and are tied on 20 points with Baroka, Polokwane City and AmaZulu in the relegation zone.

They will be looking to bounce back from the defeat to Pirates when they meet Amavarara in the Nedbank Cup last 16 at the same venue in Venda tomorrow (8pm).

Black Leopards coach Alan Clark says Gavin Hunt has -given him some advice on how to succeed at Lidoda Duvha.
Sport
1 year ago
Next Article