Notoane planning for player withdrawals for U-23 Afcon 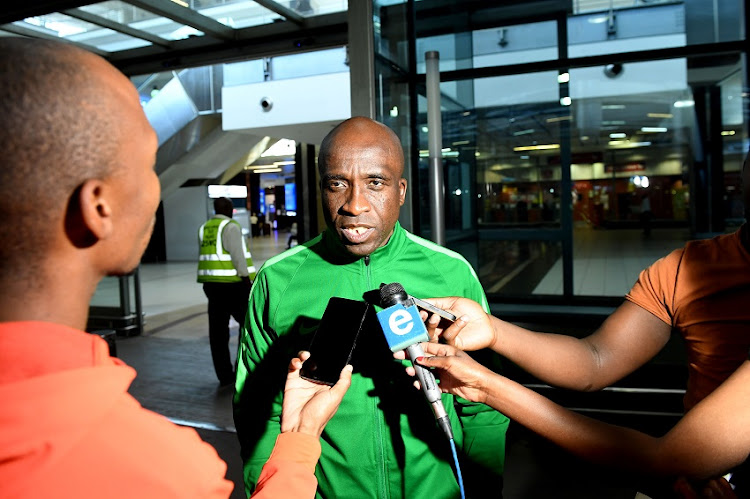 South Africa Under-23 coach David Notoane sounded almost resigned to going to the U-23 Africa Cup of Nations in Egypt next month without some of his key local and overseas-based players.

The Under-23 team are in camp preparing for the eight-nation tournament scheduled to take place from November 8 to 22.

With some of the matches falling outside the Fifa international window‚ a tug-of-war with the clubs over player availability seems inevitable.

Notoane said while he retains hopes of avoiding the tug-of-war‚ he is preparing for all eventualities.

“What we have done with this camp – being the first camp‚ and considering that the tournament will be outside the Fifa calendar – is blend the team a bit to be able to address potential challenges we might face‚” said Notoane in Johannesburg as the U23s prepared to depart for Egypt for a pre-tournament warm-up.

“There’s a Soweto derby [between Kaizer Chiefs and Orlando Pirates] on November 9 and we know the players who are going to be affected‚” Notoane added.

Notoane and his team flew out on Wednesday. They have a practice match on Friday and a warm-up friendly against host nation Egypt on Sunday‚ before the current squad return to SA and disband.

Notoane has Thabiso Monyane and Bongani Sam from Pirates and the duo of Happy Mashiane and Siyabonga Ngezana from Chiefs in his squad.

The biggest potential headache for the coach when the U-23 Afcon kicks off will be the potential unavailability of SuperSport United midfield trio Teboho Mokoena‚ Sipho Mbule and Jamie Webber.

SA play Zambia in their opening match on November 9‚ and SuperSport face Bidvest Wits in a crucial league match the night before.

Mokoena‚ Mbule and Webber are not only regulars at SuperSport but the team’s mission of winning a fourth league title this season largely rests on the big shoulders of their young stars.

“Look for every problem our jobs as coaches is to find solutions‚” said Notoane when asked if he will have the Unirted trio and some of the key players in his team for the tournament.

“I don’t want us to really focus on the problems that are not yet with us because we will bring the problems closer‚ whereas we are working now to push them away.

“So if you look at this squad then you start to see solutions for the problems that may come.”

The team are already without key European-based striker Liam Jordan and Lyle Foster for the friendlies against Egypt.

SA meet Zambia on November 9 and then take on Nigeria and the Ivory Coast on November 12 and November 15 respectively in their U-23 Afcon Group B fixtures.

Hosts Egypt‚ Cameroon‚ Ghana and Mali are in Group A.