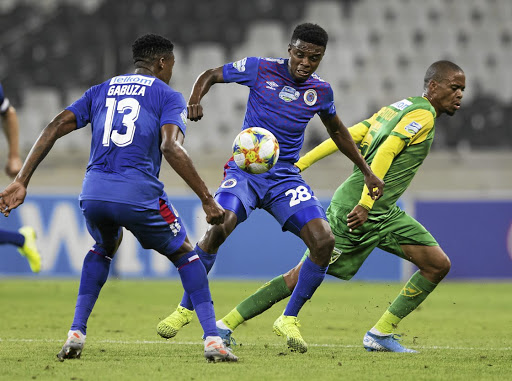 Teboho Mokoena of SuperSport during the Telkom Knockout quarterfinal match against Arrows at the weekend. Matsatsantsa did not release the midfielder for national duty.
Image: Dirk Kotze / Gallo Images

Safa president Danny Jordaan aims to challenge Fifa to schedule the Under-23 Africa Cup of Nations (Afcon) within the calendar of the world football's governing body.

Jordaan's frustration stems from local clubs' reluctance to release players for the Under-23 Afcon, starting on Friday until November 22 in Egypt.

The top-three finishers at this eight-nation tournament, that falls out of Fifa calendar, will represent Africa at next year's Tokyo, Japan, Olympics.

SA, who are in Group B alongside Nigeria, Ivory Coast and Zambia, travelled with only 13 players on Monday,with clubs like SuperSport United, Kaizer Chiefs and Cape Town City only willing to release players next week when the Fifa window for international games opens.

Skipper Tercious Malepe only linked-up with his teammates yesterday. "These are issues that Fifa must resolve because every country must be able to bring its best XI. and in Egypt SA will be the only team without its best XI," said Jordaan on the sidelines of a media conference to bid farewell to the association's outgoing acting chief executive Russell Paul at Safa House in Nasrec yesterday.

Matsatsantsa have not released their midfield pair of Sipho Mbule and Teboho Mokoena, while Chiefs are also holding on to their defender Siyabonga Ngezana.

While Bafana Bafana coach Molefi Ntseki was able to name a strong squad for the start of the 2021 Africa Cup of Nations qualifiers next month‚ the ...
Sport
2 years ago

Cape Town City's centre-back Keanu Cupido is another player who was drafted into the 21-men squad but didn't travel. "This is a Bafana team of vision 2022. It went the whole hog . U-17, U-20 . Afcon and World Cup, that's a team that will give us a kind of Bafana we need in 2022 and it's been disrupted.

"This is a problem that must be resolved, you cannot have an eight-year plan and then in year five it gets disrupted in this way," noted Jordaan.

It remains to be seen if European-based duo of Lyle Foster and Luther Singh are released in time for the opening match against Zambia in Cairo on Saturday (9pm). As things stand, Moroka Swallows' Itumeleng Shopane is the only recognised striker in the squad that comprises of 14 players at the moment.