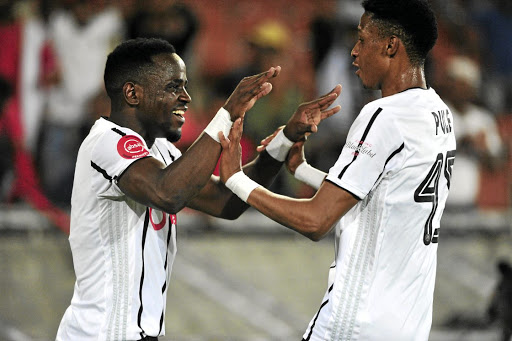 Orlando Pirates have set up a mouth-watering Soweto derby after their 1-0 win over Black Leopards reduced the gap at the summit to just six points yesterday.

The Buccaneers had to scratch and claw until the very end for maximum points at the Thohoyandou Stadium.

The victory came in a rather fortuitous fashion as Thabiso Mokoena deflected the ball into his own net during injury time after a cross from Vincent Pule. With the result, Bucs are now unbeaten against Leopards in 12 league games since 2006. Bucs will next face rivals Kaizer Chiefs in the derby on February 29. Bucs have 39 points while Chiefs' lead looks suspect on 45 points.

The tie between Pirates and Lidoda Duvha has historically been one-sided with Bucs having now registered 11 wins with the other result being a draw. Bucs striker Gabadinho Mhango made a return to the starting line-up after missing the Nedbank Cup last 32 clash against Bidvest Wits.

Mhango had an early chance to get on the scoresheet but he was smothered by the Leopards defence.

Whenever he got on the ball, one of the three would not be far away. The home team had the momentum on their side and could have scored through Gyimah, whose powerful header forced a spectacular save from goalkeeper Wayne Sandilands in 34th minute.

Zinnbauer: Orlando Pirates should not think about the league title

Orlando Pirates’ focus this season is on improvement of the players and squad, coach Josef Zinnbauer has said.
Sport
2 years ago

Leopards skipper Thabo Matlaba had two opportunities to punish his former team but he didn't show the right poise when it counted the most.

Striker Mwape Musonda struggled to get into the game as there was little supply from the midfield.

Apart from taking a few set-pieces, attacking midfielder Mogakolodi Ngele was also absent from the encounter.

In all honesty, Leopards players did not show up on the day and posed little threat to the Bucs backline.

It looked as if the match was headed for a goalless draw, but Bucs kept up the fight until the end.

In a last-gasp attack, Pule attempted to make a cross into the box but Mokoena inadvertently headed the ball into his own net past a hapless Rotshidzwa Muleka between the sticks.

Edmilson Dove and Taariq Fielies were on target for the visitors.