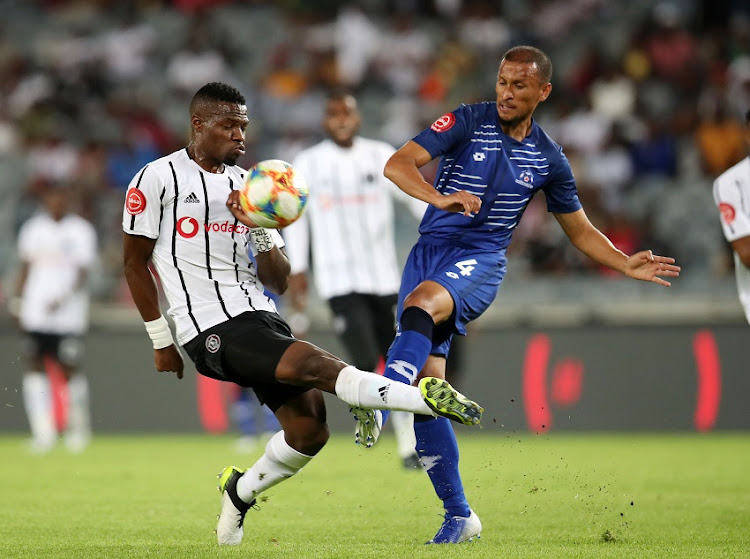 Orlando Pirates paid a heavy price as they not only dropped home points against Maritzburg United in a goalless draw at Orlando Stadium on Tuesday night but also saw Happy Jele sent off.

It means Pirates’ inspirational captain will miss Saturday’s derby against Kaizer chiefs at Soccer City in a big blow to a beleaguered team.

Pirates claimed a late goal when substitute Justin Shonga battered the underside of the crossbar but it was not awarded, to add to their frustration.

Both sides finished the game down to 10 men when Kwanda Mngonyama of Maritzburg was also sent off.

Maritzburg will be far the happier of the two sides as they kept a clean sheet for a fourth successive league match.

Pirates’ plan against a Maritzburg defence, that has been stingy this season, was to play balls over the defence and get speedy attackers onto them, timing their runs to beat the offside trap.

It worked well in the opening 10 minutes when two good chances were created that should have given the hosts a comfortable lead.

Inside the opening 60 seconds, Vincent Pule lofted the ball for Frank Mhango, who got into space superbly, pulled it back for Kabelo Dlamini, whose shot was then superbly saved by Richard Ofori.

Pule then beat the offside trap himself after just seven minutes but with his back to goal failed to get a clear shot away and another chance went abegging.

Ofori was back in action in the 40th minute to deny Mhlango at the near post, having to twist his body and put out a stiff arm to force the ball around the corner.

The Ghana goalkeeper faces Bafana Bafana in just over a week’s time and in this form could be a major roadblock to South Africa’s hopes of success in their opening Africa Cup of Nations qualifier.

Maritzburg had a few bursts on the counter but it was not until the last five minutes of the first half that they took advantage of Pirates’ defence slacking into one of those concentration slumps that has characterised their season so far.

Thabiso Kutumela had a chance to score from close-in with Happy Jele doing well to block him, but the defence was switched off when Mngonyama went closed with a half chance soon after.

The second half started just like the first with Ofori needing to make a sharp save from Mhango almost straight from the kick off but still no goal, which prompted coach Rhulani Mokoena to bring on the Zambian duo of Augustine Mulenga and Justin Shonga in the 56th minute.

Pirates then laid siege to the visitor’s goal but when Maritzburg got a counter attack chance, Jele fouled Kutumela, for his second yellow of the game and went off for an early shower.

That changed the complexion of the game again, offering Maritzburg a sudden advantage.

But Mhango remained dangerous, having a clear cut chance with 15 minutes to go, but hitting it straight at Ofori.