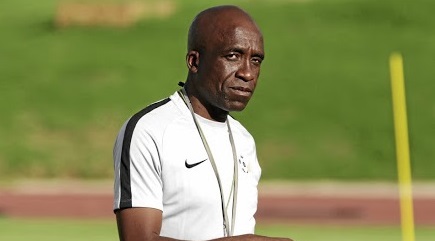 With next month's Under-23 Africa Cup of Nations (Afcon) in Egypt falling outside the Fifa calendar, SA coach David Notoane is prepared for any eventualities as some clubs are likely to not release players.

SuperSport United's chief executive Stan Mathews, as quoted by a Sunday newspapers this past weekend, has already made it clear they won't release their trio of Sipho Mbule, Teboho Mokoena and Jamie Webber, unless the SA Football Association (Safa) and the Premier Soccer League (PSL) agree to postpone league fixtures for the duration of the U23 Afcon, scheduled for November 8-11.

Despite the uncertainty regarding their availability for the eight-nation tournament, yesterday, Mbule and Webber travelled with the provisional squad to continue with their preparations in Egypt. SA will gauge their readiness by entertaining the hosts in a friendly in Cairo on Sunday.

"Considering that the tournament will be outside the Fifa calendar, we've blended the team a little bit to be able to address potential challenges that we might face going forward," Notoane said.

"There's a [Soweto] derby [between Kaizer Chiefs and Orlando Pirates] on November 9, we know the players that will be affected in this group [Chiefs' duo of Siyabonga Ngezana and Happy Mashiane alongside Bongani Sam and Thabiso Monyane of Pirates]."

Meanwhile, Safa president Danny Jordaan has confirmed that the plans to engage the PSL, to tweak their fixture programme, were in place, hoping SA will send the strongest team they have to Egypt. PSL acting CEO Mato Madlala couldn't be reached for comment

"We've already written a letter to them [PSL], we'll be sending that letter soon and convene a meeting. I don't hope that the issue of club versus country will derail the team's possibility of qualifying [for Olympics]," Jordaan said.

SA are also at risk of being compelled to soldier on without overseas-based strikers in Lyle Foster and Luther Singh as their clubs Cercle Brugge (Belgium) and Moreirense (Portugal) respectively, seem likely not to free the pair.

"The foreign clubs follow the lead of SA clubs; if all SA clubs release the players, there are better chances of overseas teams doing the same," said the Safa president.

The top three teams in Egypt will represent Africa at the 2020 Olympics in Tokyo, Japan. SA opener in Group B is against Zambia on November 9. Other Group B teams are Ivory Coast and Nigeria.

SA Under-23 skipper Tercious Malepe has reacted to the U-23 Africa Cup of Nations (Afcon) draw with glee.
Sport
2 years ago

SA drawn against Zambia, Nigeria and Ivory Coast for Under-23 Afcon

South Africa were drawn with the Ivory Coast, Nigeria and Zambia in Group B for next month’s U-23 Africa Cup of Nations in Egypt from where the top ...
Sport
2 years ago

In the wake of inspiring SA Olympics team to qualify for the U-23 Africa Cup of Nations, left winger Gift Links believes more players from the side ...
Sport
2 years ago
Next Article