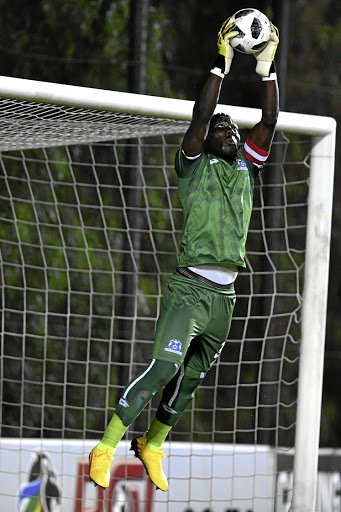 Ofori, 26, has been in fine form since arriving at Maritzburg from his native side Lagon Cities in 2018. Local clubs like Orlando Pirates and Mamelodi Sundowns, alongside a myriad of French teams are believed to be keen in signing the Team of Choice shot-stopper.

Ofori put in another splendid display to help Maritzburg overcome league leaders Kaizer Chiefs 2-1 at FNB Stadium at the weekend, where Daylon Claasen managed a brace, with Samir Nurkovic scoring his 11th league goal for Amakhosi.

"If someone wants him, it's going to be a lot of money... that I can tell, because of the qualities that he has," Tinkler said of Ofori.

"Richard is a quality goalkeeper, there's always gonna be interest in him, but he's a good professional, modern professional... he works extremely hard. There are aspects of his game I still feel he must improve on, but he remains our No1 goalkeeper and our captain."

The Team of Choice had a productive week in Gauteng, beating two title challengers in Bidvest Wits and Chiefs in a space of three days, respectively.

Tinkler has since set his sight on helping the KwaZulu-Natal Midlands outfit maintain their spot in the top-eight until the end of the season.

"Our objective, as I said it before, was to get to the 30-point mark [they now have 33, sitting in position six on the log after 22 games] and we now want to finish in the top eight," noted the Maritzburg mentor.

Maritzburg's next fixture is away to Bloemfontein Celtic in the second round of the Nedbank Cup on Saturday (8.15pm).

Eric Tinker hopes his side will take some momentum into two “crucial” away games against Bidvest Wits and Kaizer Chiefs in the next week in the wake ...
Sport
1 year ago
Next Article