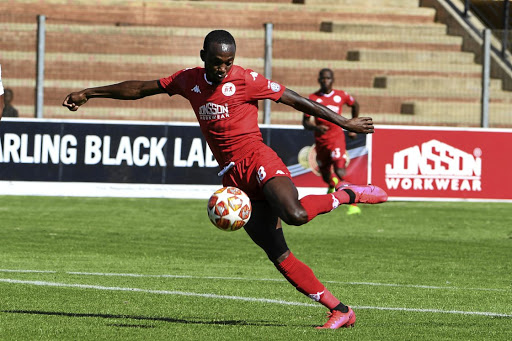 If you set goals in life, work hard and push yourself even above your limits, you are bound to achieve those dreams - even above them.

That was the reaction of deadly Highlands Park striker Peter Shalulile after he netted a brace that saw his team retain the number eight spot in the league table.

This after the Lions of the North defeated Bloemfontein Celtic at Makhulong Stadium on Saturday. The result also meant that Highlands avenged their first-round 3-1 defeat at the hands of Celtic.

The speedy Namibian international was also on target last week when Highlands Park bundled Uthongathi out of the Nedbank Cup competition at the same stadium in Tembisa on the East Rand.

"If you work hard and push yourself, you will be achieve your goals," said the forward, who has since scored 12 goals.

Peter Shalulile getting his mojo back

"I set goals for myself, which is scoring 15 goals. Anything beyond that will be a bonus. My teammates always encourage me to keep pushing - basically this is all about team work and I am very happy to be able to score goals that do a difference for my club."

Playing as a unit is what Owen da Gama's charges do so well. That was evident when Lindokuhle Mbatha was in a favourable position to register his name in the scorers list in the second half after Shalulile had put Highlands ahead in the first half, but he unselfishly rolled the ball to him and he said thank you, hitting the final nail in Siwelele's coffin in the 53rd minute.

Mothobi Mvala - who returned from the injury - was denied a goal by the upright after being set through by Mbatha, with off-form and full of mistakes goalkeeper Jackson Mabokgwane a beaten man in the 36th minute.

Celtic missed a golden chance to reduce the deficit from a goalmouth scramble in the 60th minute. The body language of coach Lehlohonolo Seema in the post match interview said it all.

"We didn't expect an easy game but if you look at the second goal, we could have done better. It's one of those games," he said with a gloomy face. Celtic forced seven corners but still could not make use of at least one of them.