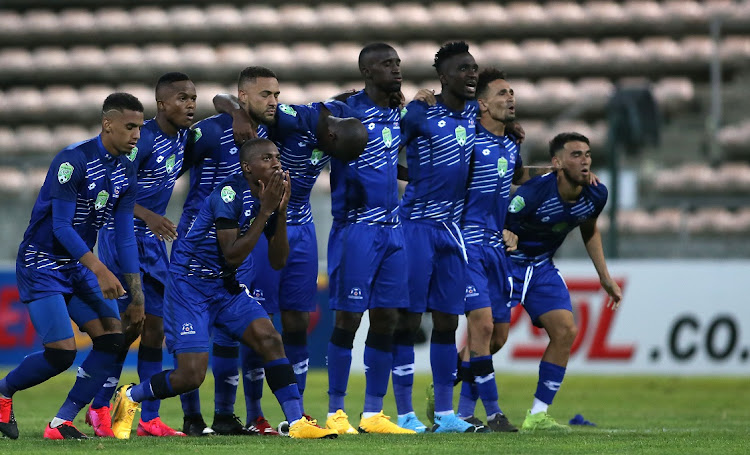 Maritzburg triumphed 5-4 on penalties at Athlone Stadium in Cape Town on Friday night, after a 2-2 draw in a game with a lively first half that petered out into a contest of attrition the longer it went on.

The fact that his side, with seven changes, came out victorious in the end is a great boost according to Tinkler, who has prioritised finishing as high as possible in the league this season over Nedbank Cup success.

“The games with Wits and Chiefs have been in my thoughts because the league is very important for us,” Tinkler said, as his side currently occupy a creditable sixth place in the Absa Premiership.

“We have done well so far and yes we are away from that bottom group, but it’s not for that reason. It’s more targets and objectives that I have set for myself and the team has set for itself, and these next 10 games are extremely important and we want to make sure we finish well.

Maritzburg were without the likes of striker Judas Moseamedi, goalkeeper Richard Ofori and midfielder Keagan Buchanan as Tinkler saved them for the coming assignments.

“As much as there was the important task of winning this game, the confidence and the morale, you go into those two games well prepared. But I think it was also important to rest certain figures that have been instrumental for us this season,” he said.

“I would have loved to have rested even more. Daylon Claasen has played every bloody game, and again tonight another 120 minutes. His work ethic is absolutely phenomenal. But we have quite a small squad, so it is difficult for me to rest everybody.”

Tinkler admitted it was hard to be too critical of his players as many had not played in a while, and the nature of the game meant that as it wore on, legs would get heavy and mistakes would be made.

But Maritzburg must first get over Stellies.
Sport
1 year ago

“We knew it was never going to be easy, especially due to the fact that I made a lot of changes. To sit on them now and blame players because the performance was not where we expected would be harsh.

“We have players who have not played in a while. It takes a little while to settle.

“But like the players have been all season, the work ethic and the team spirit is there. Our goal was a beautiful goal. It was more about what we practise in training. The penetration, the little give-and-goes, were excellent.

“We wanted to see more of that in the second half, but we didn’t. Legs start going because you have so many players who have not played in a while.

“As the clock was ticking for the last 10 or 15 minutes of that second half neither team wanted to get forward. They wanted to take what they had and try and go to the penalties.

“There was a great chance that we had with Jeremy [Brockie] — normally I would expect him to shoot but he didn’t, he opted to look for a pass. But that was a clear-cut opportunity for him.”

Maritzburg go into Monday’s last-16 draw in the Nedbank Cup, looking to repeat their 2018 trip to the final where they lost 1-0 to Free State Stars in Cape Town.

Maritzburg United chairman Farook Kadodia reveals that the club will make a decision on striker Jeremy Brockie at the end of the season when his loan ...
Sport
1 year ago

Cape Town City midfielder Thabo Nodada admits that there has been plenty of introspection in what has been a difficult season of the Absa ...
Sport
1 year ago
Next Article