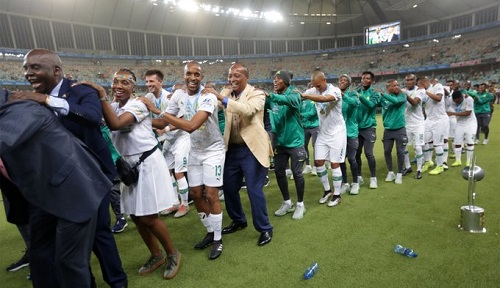 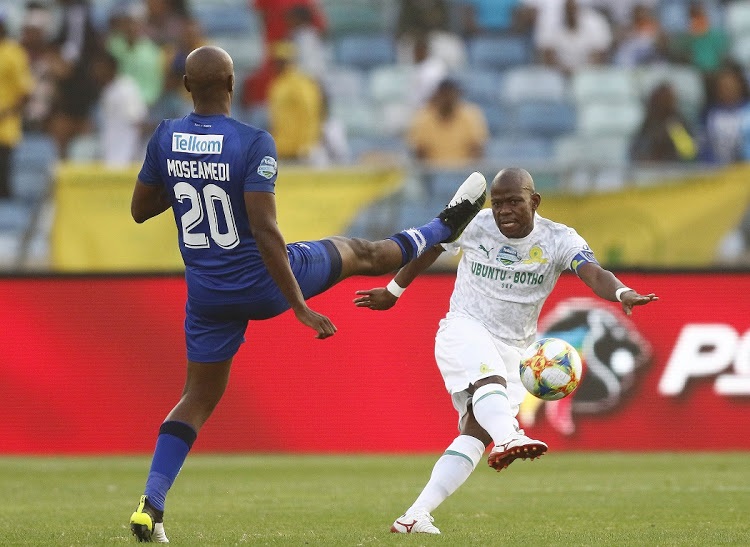 Striker Mauricio Affonso scored twice in the second half as Mamelodi Sundowns came from a goal down to edge Maritzburg United 2-1 and win the Telkom Knockout on Saturday at the Moses Mabhida Stadium.

The Uruguayan import arrived with an impressive goalscoring record from South America but was injured during his opening months with Sundowns and has only recently begun to feature.

But his pedigree was quickly evident and then significantly enhanced on Saturday as his two headers turned the game on its head and secured another trophy for the league champions.

Judas Moseamedi had Maritzburg ahead in the 40th minute and looked to equalise with the last touch of the game but was ruled offside in a controversial call.

A goalkeeping blunder by Richard Ofori allowed Sundowns back in the game as Affonso netted his double, the second from a corner as the Maritzburg defence again let themselves down.

Midfielder Sibusiso Vilakazi says four years is a long time for a championship-winning team like Mamelodi Sundowns not to win a domestic cup ...
Sport
2 years ago

“Thanks God, the hulk Mauricio came to the party. He gave us a different dimension.”

Maritzburg might well have had a goal inside 90 seconds when Moseamedi got the ball before Denis Onyango, kicking it against the knee of the Sundowns goalkeeper and seeing the ball spill to Keagan Buchanan, who, with the goal at his mercy, missed from the edge of the penalty area.

It was a golden chance for the underdogs to get onto the scoresheet early, but it did embolden them to set up several half-chances in the opening 20 minutes.

Maritzburg certainly did not look overawed, but still played with a cautious approach and eventually it allowed Sundowns to wrestle control of the ball despite a crowded midfield.

But Maritzburg were ready for that eventuality, dropping their defensive line, and so it proved difficult for Mosimane’s men to create the openings they were looking for.

Even when Downs pushed their fullbacks higher and opened up the game on the wings, Maritzburg held firm.

Just before the half-hour mark Mxolisi Kunene had a chance that he skyed over the top before a clumsy challenge at the other end from Kwanda Mngonyama on Mosa Lebusa was inexplicably allowed to go without punishment when it should have been a Sundowns penalty.

Moseamedi cut inside from the byline in the 38th minute to set up a chance for himself that Lebusa blocked, but two minutes later came the breakthrough.

A long punt upfield from Ofori bounced all the way to the edge of Sundowns’ box, where Moseamedi chased onto it and hooked his right foot onto the ball as Onyango came out and Lebusa looked to have it covered.

It was glorious goal of persistence and opportunity and kept up the predatory role that Moseamedi has played since two goals in the upset semifinal win over Kaizer Chiefs.

Four minutes after the goal, Moseamedi set up a good chance for Daylon Claassen but Tebogo Langerman came in at the vital moment to intercept to keep the half-time deficit down to one goal.

Maritzburg came out for the second half looking haughty but Ofori’s mistake handed Sundowns the equaliser coming out to try and clear Gaston Sirino’s cross, but missing as Affonso headed home in the 54th minute.

His second came in the 76th minute from corner where the Maritzburg defence missed the ball completely too.

But the game should have gone to extra time when Moseamedi’s diving effort found the back of the net from close range, only to be flagged offside.

Mamelodi Sundowns will bring out the heavy artillery for the Telkom Knockout final, with Gaston Sirino set to make his return for the clash.
Sport
2 years ago

The season of Mamelodi Sundowns utility player Rivaldo Coetzee may be over.
Sport
2 years ago

Underdogs Maritzburg United have ruled out the possibility of freezing when they face favourites Mamelodi Sundowns in the final of the Telkom ...
Sport
2 years ago
Next Article