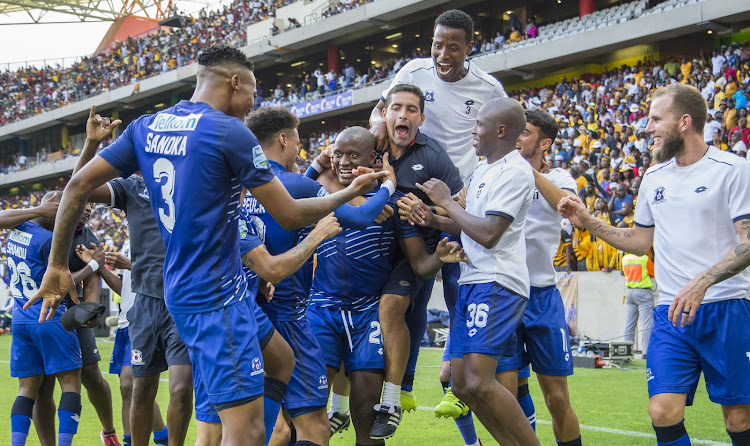 Striker Judas Moseamedi scored a brace as Maritzburg United claimed a deserved 2-1 victory over Kaizer Chiefs in their Telkom Knockout semifinal at the Mbombela Stadium on Sunday.

The victory sets up a final meeting with Mamelodi Sundowns at Durban’s Moses Mabhida Stadium on December 14‚ and ensures Chiefs’ trophyless run will extend to a club record five years.

Maritzburg were full value for the win and should have been victors by a greater margin as they spurned chance after chance against an unusually brittle Chiefs defence.

AmaKhosi defender Yagan Sasman had levelled late on to give the suggestion of extra-time‚ but Maritzburg would not be denied and Moseamedi’s brace booked just a second ever cup final for the team after they lost the 2018 Nedbank Cup decider to Free State Stars.

Chiefs forward Khama Billiat‚ who has not scored for the side since September‚ was missing through what the club termed an ‘injury precatiuon’‚ though he showed no ill-effects when he netted twice for Zimbabwe against Zambia in an Africa Cup of Nations qualifier on Tuesday.

Chiefs did welcome back midfielder Kearyn Baccus after five weeks on the sidelines‚ but he lasted only a half before being replaced at the break by Dumisani Zuma‚ while goalkeeper Bruce Bvuma was selected due to the suspension of Daniel Akpeyi.

Teenage defender Njabulo Blom also came in for Erick Mothoho‚ who also sat out through suspension.

Maritzburg started the brighter and Bvuma had to react smartly when Pogiso Sanoka’s cross was floating in at the back post‚ until the gloveman tipped it over for a corner.

The KwaZulu-Natal side hit the front on 30 minutes‚ with Chiefs the architects of their own downfall.

Daniel Cardoso’s weak back-pass to Bvuma was latched onto by Moseamedi and the striker rounded the keeper and side-footed the ball into the empty net.

Chiefs were battling to create anything clear-cut in front of the Maritzburg goal – Leonardo Castro missed his shot from a low cross and Bernard Parker headed wide when his connection was not true.

Maritzburg should have doubled the advantage when a poor clearance from Sasman ended up at the feet of Mxolisi Kunene‚ but he could not get his shot away with just Bvuma to beat as Chiefs continued to look ragged at the back.

It was only 1-0 at the break‚ but Maritzburg continued to create the better chances in the second period.

Daylon Claasen was played into acres of space in the box and with time and space to pick his spot‚ curled his shot onto the outside of the post in what was another golden chance gifted away.

Moseamedi flashed a shot narrowly wide of the goal with Bvuma beaten‚ and then crashed a half-volley high and handsome over the bar with just the keeper to beat as chance after chance went begging.

They were seemingly made to pay with 13 minutes remaining as Lebo Manyama’s free-kick was headed goalwards by Samir Nurkovic and when Maritzburg keeper Richard Ofori could only parry the effort‚ Sasman turned the loose ball home.

Chiefs upped the tempo after their goal and finally seemed to come alive as an attacking force‚ but were also left exposed at the back as they pushed forward.

After Bvuma had saved one-on-one with Moseamedi‚ the striker crashed home the winner with an excellent volley from substitute Bandile Shandu’s cross with not a defender in sight.

Patrice Motsepe is not only one of the richest men in South Africa‚ but also has a say in how two of the most successful sporting entities based in ...
Sport
1 year ago

South Africa Under-23 coach David Notoane has called on the South Africa Football Association (Safa) and the Premier Soccer League (PSL) to hatch a ...
Sport
1 year ago

Ernst Middendorp might not have worked with many of Maritzburg United’s current players but says he has kept close tabs on matters at his old club‚ ...
Sport
1 year ago
Next Article