SuperSport United coach Kaitano Tembo refuses to give up the fight 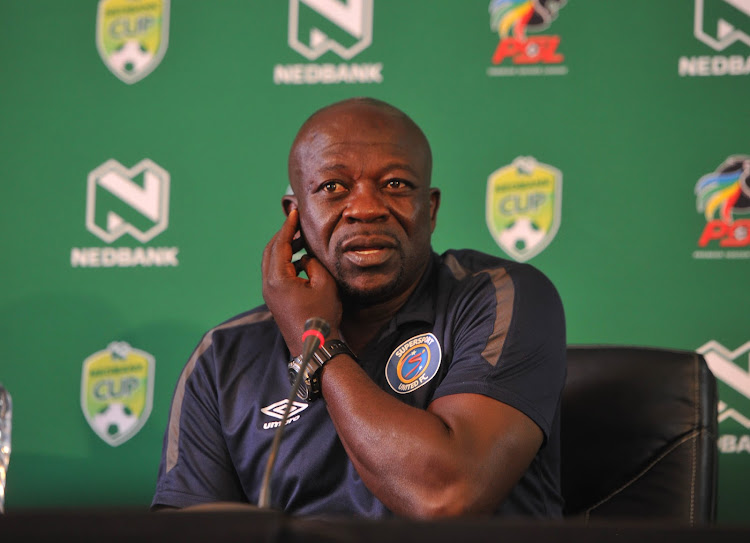 Kaitano Tembo is targeting a top three finish in the league to qualify for next season's Caf tournaments.
Image: Sydney Mahlangu/BackpagePix

SuperSport United coach Kaitano Tembo says they still have a lot to play for in their remaining Absa Premiership matches this season as they are gunning for qualification in either the Caf Champions League or the Caf Confederation Cup.

United have nine games remaining this season but the race to secure a place in one of the continental competitions is a tricky one as the sides chasing runaway leaders Kaizer Chiefs are Orlando Pirates‚ Mamelodi Sundowns and Bidvest Wits.

“We will try do to our outmost best and make sure that we finish probably second or third on the log standings in the league.

"That would give us an opportunity to play in Africa next season‚ which is important‚” said Tembo‚ who coached United for three matches on their way to the Confederation Cup final where they lost to TP Mazembe in 2017.

“There is still a lot to play for‚ our aim is to try and finish as high as we can on the standings.

"I think we have a very good squad‚ we have players who are well aware that their season is still long.

“It is not yet finished because we have nine games to go in our season and in those nine games there is 27 points to play for.

"That’s s a lot to play for and we have to do well in our remaining matches so that we can push ourselves a few positions up on the standings.

"We must strive to always improve and who knows?

"Pirates recently went on a good run of five wins in a row and now they are sitting second position on the log. Players are aware that if they do the same‚ we will significantly improve our position.”

United‚ who were eliminated from the Nedbank Cup last weekend by city rivals Sundowns‚ will not end this campaign empty-handed as they walked away with the season-opening MTN8 last year.

United’s mission to end the domestic campaign on a high note continues when they visit highly unpredictable Stellenbosch FC at Cape Town Stadium on Friday where they will be looking to get back to winning ways.

In their last league match‚ United lost 1-0 to Lamontville Golden Arrows away from home and missed a golden opportunity to climb to second spot on the standings and put pressure on Chiefs.

Sukazi has faith in Ajao and Mtsweni
Sport
2 years ago

Former Orlando Pirates midfielder Joseph Makhanya believes Luvuyo Memela deserves as much praise for the team's revival in the league.
Sport
2 years ago
Next Article