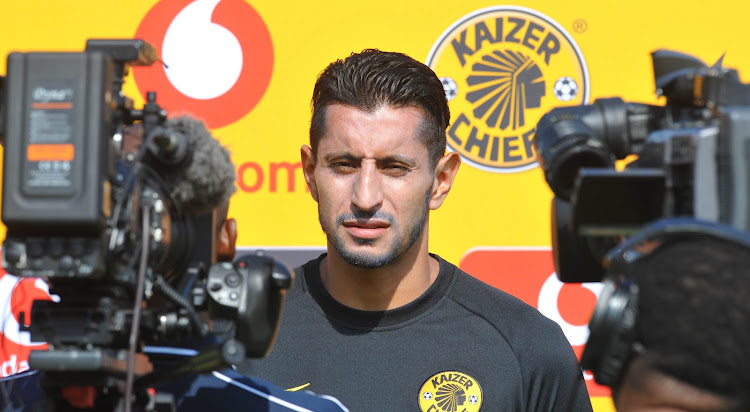 Leonardo Castro speaks to the media during a press briefing at Naturena on February 13 2020.
Image: Sydney Mahlangu/BackpagePix

Kaizer Chiefs striker Leonardo Castro is relishing his partnership with Samir Nurkovic‚ saying he could not have been paired with a better player as Amakhosi gun for their first Absa Premiership title in five years.

Chiefs play Maritzburg United at the FNB Stadium on Saturday and with a game in hand and a nine-point advantage over second-placed Orlando Pirates‚ Amakhosi are favourites to win their first league title with German coach Ernst Middendorp.

Castro was on the verge of being off-loaded by Chiefs at the beginning of the season after struggling to impress after joining the club in January 2018 from Mamelodi Sundowns.

But after playing himself back into favour with some stellar performances in the off-season‚ all was forgotten as he also found his best partner in Slovakian-born Nurkovic.

“When I got the chance to play I was making sure to score and get the results for the team and for myself‚” said Castro of his determination to stay at Naturena.

“I’m always a person who is strong in my mind and I’m working hard at training to contribute into the team.

“For me‚ whether it’s a friendly or an official game I take the responsibility.

“I knew that if I’m doing alright (in the off season) I might get a chance in the official games.

“The coach (Ernst Middendorp) gave me a chance and I took it‚ simply as that.”

The two tall strikers have contributed 17 of Chiefs' 38 league goals in 19 matches this season and Castro‚ who is yet to sign a new contract with the club‚ praised Nurkovic for helping him settle at Naturena.

“For me it’s easy to play with Samir because we can hold the ball for the team and we can make them play as well‚” said the 30-year-old Colombian striker.

“When there’s pressure they can find us there at the top.

“Either it’s Samir or me but we can play together and we know that if one is going wide the other needs to be in the box to finish the action.

“So it’s been good‚ we understand each other on the field.”

Castro added it was not important who scored the most goals for the team at this stage of the season.

“The most important thing is making sure‚ no matter who scores‚ we need to win each and every game‚” said Castro.

“So either it’s (Eric) Mathoho who is scoring‚ (Daniel) Cardoso‚ (Lebogang) Manyama… no matter who is scoring‚ the most important thing is to make sure that we get the three points.”

Castro admitted that it is vital that they do not disappoint their fans as Chiefs celebrating their 50th anniversary this year.

“Look this season is special for the club and for SA. So 50 years for us means we need to deliver‚” he said.

“I think the whole squad knows and realize we need to win the league. You can see it during the games… we’re fighting.

“If we’re losing we’re fighting to get back into the game.

“That’s the mentality that all players have got right now.”

Castro said Chiefs' main strength this season has been thinking more about how they approach each and every game than worrying about the opposition.

“We’re focusing on ourselves‚ on what we need to do‚” he said.

“We all know we’re playing against. This is our strength… focusing on ourselves.

“We all know about Maritzburg United‚ and that they’ve got quality players and it’s a good team.

“It’s been tough for us when we have played against them but we’re working hard on the field to get the results.

“We all know what happened in the past games against them‚ maybe they scored against us because of our mistakes.

“So we need to be mentally focused in that game and really don’t make stupid mistakes because they’re going to take it (their chances).”

Kurt Abrahams is not a name known to many local football fans‚ but the Westerlo forward is closing in on the record of Percy Tau in Belgium last ...
Sport
2 years ago

Orlando Pirates coach Josef Zinnbauer and his striker Gabadinho Mhango were the undisputed stars of the show for the Absa Premiership for January, ...
Sport
2 years ago

Mystery has deepened over the status of Orlando Pirates assistant coach Rulani Mokwena after the club said they 'do not know' where he is or how long ...
Sport
2 years ago
Next Article