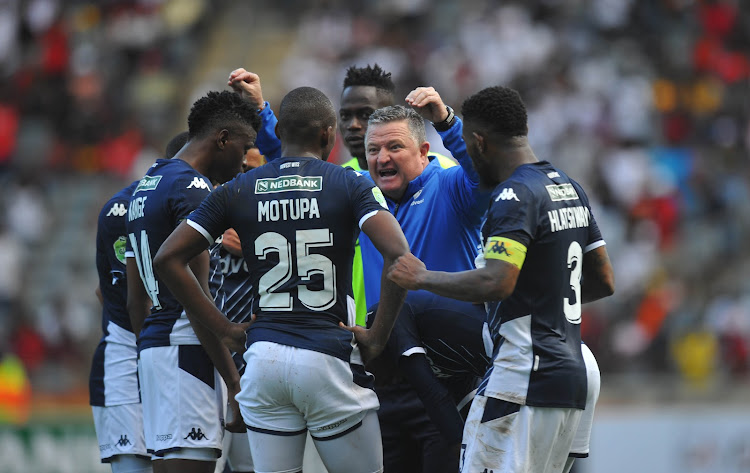 Gavin Hunt talks to his players during the Nedbank Cup last 32 encounter against Orlando Pirates on February 9 2020.
Image: Sydney Mahlangu/BackpagePix

Bidvest Wits coach Gavin Hunt fears his thin squad could crash and burn as they chase glory on two fronts in the Absa Premiership and Nedbank Cup.

Wits advanced to the Last 16 round of the Cup after an energy-sapping match against Orlando Pirates that went to extra time and eventually a penalty shootout which they won on Sunday.

They are still in with a chance to challenge leaders Kaizer Chiefs for the Premiership title.

The fifth-placed Wits may be trailing Amakhosi by 15 points with four matches in hand but the fact that they still have to play Chiefs twice in the league in the run-in will give them reason to believe.

With a squad of just 22 players‚ and having to play catch-up matches‚ six outings in the month of February will test their championship credentials and could see their appetite for silverware this season evaporate.

“It will be very difficult for our squad but you know we will have to manage it. We can’t prioritise cups or league games‚” said Hunt.

“Every game is important to us. We can’t be like Liverpool and play the Under-19s no no no.”

Having fallen behind on the domestic fixture scheduling due to their participation in the Caf Confederation Cup‚ Wits return to league action for the first time in three weeks when they host Maritzburg United at Bidvest Stadium on Wednesday.

Playing 120 minutes against Pirates would have taken a toll on the Wits players and another grueling encounter against hard-running Maritzburg three days later is not ideal for Hunt’s men.

“Look it’s going to catch up with us there is no doubt about that. Our squad is the smallest in the league. We have got a squad of 22 players‚” said Hunt.

“Hopefully we don’t get caught too much. The daytime games also don’t help us because the tempo of the game is much slower.”

After the Pirates and Maritzburg (Wednesday February 12) matches‚ Wits will take a four-hour road trip to Baroka FC (Saturday February 15) and then drive back to Johannesburg to host Highlands Park four days later on the 19th.

Chippa United will follow in the cup on the weekend of February 22-25 before they conclude this month's fixture list with a short trip to fellow title hopefuls SuperSport United on the 29th.

The Wits coach‚ however‚ is banking on his experience in title chases having guided Wits to the 2016/17 Premiership title.

“What we do have is a lot of know-how and that’s important in football. The know-how - it doesn’t always win you games but I think that will help us‚” said Hunt.

Wits could have played a match more this month but their home fixture against Black Leopards on Thursday February 6 was postponed due to inclement weather in Johannesburg.

lSafa's head of referees Tenda Masikhwa has hailed Victor Gomes as being among the best referees in Africa despite some of his questionable calls.
Sport
2 years ago

After crashing out of the Nedbank Cup at the hands of Bidvest Wits at the weekend, Orlando Pirates are in danger of ending their sixth season without ...
Sport
2 years ago
Next Article