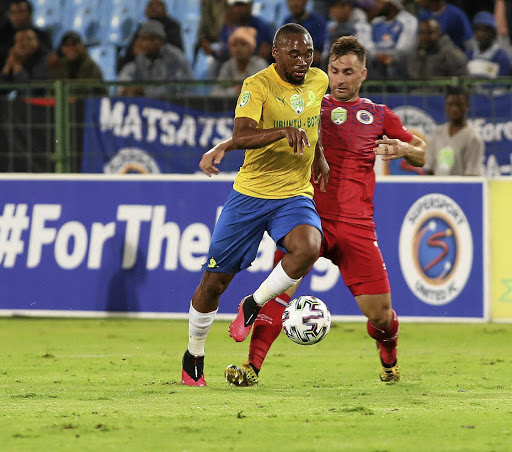 Sibusiso Vilakazi, seen in action with Bradley Grobler of SuperSport, scored the only goal to book Sundowns a place in the Nedbank Cup last 16. / Veli Nhlapo

Sirino has come to be known for his fiery temper on the field of play that has got him in trouble with his club and the PSL.

In the clash between Sundowns and SuperSport on Saturday, Sirino made a dangerous tackle towards Daniels. The Uruguayan was fortunate only to get a yellow card, as Sundowns qualified for tonight's Nedbank Cup second round draw after winning 1-0 thanks to Sibusiso Vilakazi's goal. It is not the first time the two players have had issues as a previous altercation earlier in the season resulted in Sirino being charged by the PSL for allegedly slapping Daniels.

"I don't know what is happening with him but I just wish I can take him for a coffee and we can talk nicely and not behave like that on the field," Daniels said. "He is a great footballer and is a good player in my eyes. I don't have a problem with him. He is doing well for Sundowns, it's just the small things that he must put aside.

"I went to him after the game and I said, 'my boy let's not play like that'. I hope that he learned from it because he could have got a red card."

Sirino has not yet been penalised for the incident that happened in September. PSL prosecutor Nande Becker had earlier informed Sowetan that a ruling would be made last week, but that has still not happened. After the game, Sundowns coach Pitso Mosimane said: "We know Gaston has a short fuse ... I spoke to the referee next to me, Victor Gomes (who was fourth official), that we need to protect him but when he clatters into Clayton like that, you can't protect him."

With United now out of the Nedbank Cup after the loss to Sundowns, Daniels said his team will fight to finish as high as possible. "We are out of the cup and still have a lot to play for in the league. We are number four in the league and we will push to see how far we can finish."

Vengeance will be on the minds of Al Ahly when they take on Mamelodi Sundowns in the CAF Champions League quarterfinals.
Sport
1 year ago
Next Article