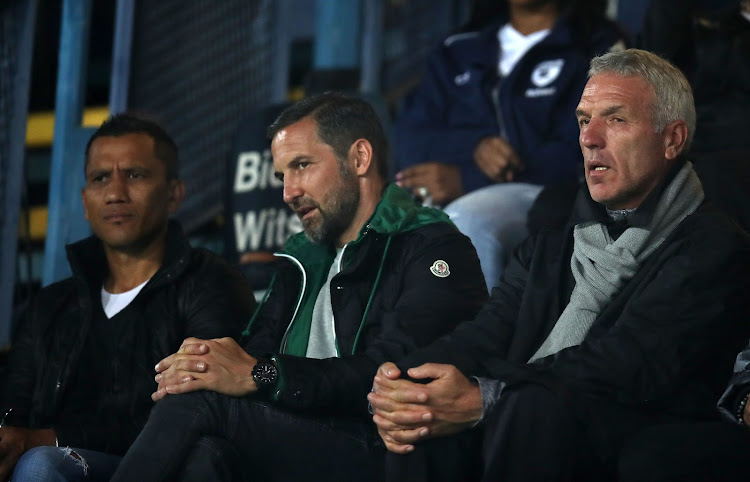 Orlando Pirates Josef Zinnbauer (C) attends the Bidvest Wits vs Black Leopards match in Johannesburg on February 6. On the right of Zinnbauer is his German compatriot and Kaizer Chiefs counterpart Ernst Middendorp. Ernst Middendorp, coach of Kaizer Chiefs with Josef Zinnbauer, coach of Orlando Pirates during the Absa Premiership 2019/20 match between Bidvest Wits and Black Leopards at the Bidvest Stadium, Johannesburg on the 06 February 2020 ©
Image: Muzi Ntombela/BackpagePix

Kaizer Chiefs coach Ernst Middendorp has said the fruits of Khama Billiat’s rest were there to see as the playmaker came off the bench in Amakhosi’s Nedbank Cup win against Royal Eagles‚ even if that was balanced by some rustiness.

Billiat added much-needed creativity coming on for Leonardo Castro with the score goalless at FNB Stadium on Saturday‚ and pried some good openings‚ as eventually it was Lebogang Manyama who grabbed the winning goal in the 70th minute for a 1-0 win to Chiefs.

The Zimbabwean had returned from six weeks of enforced rest without a competitive game – with no declared injury – after Middendorp and his technical team had found Billiat to be jaded by December.

After such a prolonged absence‚ there was also some rustiness‚ and Middendorp said he will continue to introduce Billiat back by stages.

“We are definitely very‚ very pleased to have Khama [back]. That was our intention taking him out from December 22‚ and taking him out for a long time‚” Middendorp said.

“And you can now see. He has a good touch‚ he’s sprinting 100 percent.

“But on the other side‚ being out for such a long time‚ don’t over-stretch it. Probably today 45 minutes‚ and in the near future 60 minutes.

“It was his first competitive 45 minutes after a long time not involved. And what I have seen – ja‚ good.”

Billiat’s previous competitive game had been the 1-1 draw away against Maritzburg United on December 22.

Chiefs have shown themselves to be impressively not reliant on the playmaker in his absence‚ maintaining the positive results that have kept them top of the Absa Premiership by nine points.

The thinking in resting Billiat‚ according to Middendorp‚ stems from the mixed bag of performances he produced in the first half of the season‚ with one goal in 12 league and cup matches by December.

Middendorp had complained that competing for Zimbabwe in both the Cosafa Cup and the Africa Cup of Nations in Egypt – where Billiat was one of the stars of the group stage – in the off-season had been too much for one of his star attackers.

As Chiefs aim to clinch a league title‚ and reverse four seasons without silverware‚ they will hope that a refreshed Billiat can have much to offer in the killer final third stage of the 2019-20 campaign.

It will be a case of seeking redemption when Polokwane City and Baroka face off in the Nedbank Cup last 32 Limpopo derby at Peter Mobaka Stadium ...
Sport
1 year ago

lSafa's head of referees Tenda Masikhwa has hailed Victor Gomes as being among the best referees in Africa despite some of his questionable calls.
Sport
1 year ago

After crashing out of the Nedbank Cup at the hands of Bidvest Wits at the weekend, Orlando Pirates are in danger of ending their sixth season without ...
Sport
1 year ago
Next Article