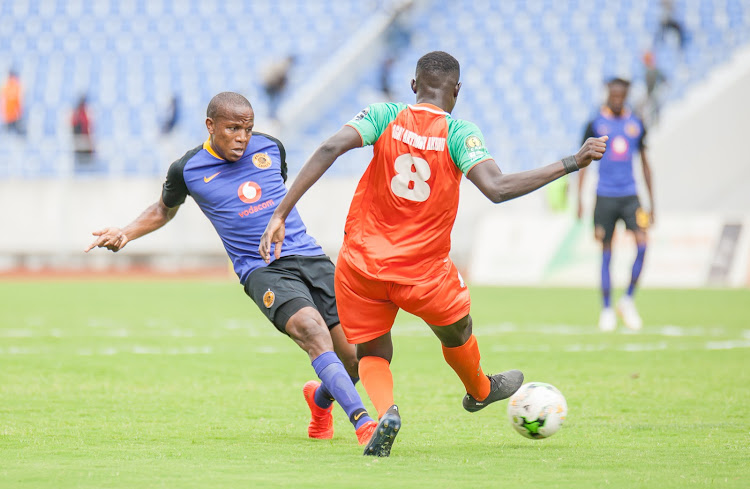 Lebogang Manyama fights for the ball against Anthony Akumu, formerly of Zesco United during the CAF Confederations Cup in January 2019. Akumu has since joined Kaizer Chiefs and made his debut on February 8 2020.
Image: Sid Kalunga/BackpagePix

Kaizer Chiefs coach Ernst Middendorp pronounced himself satisfied with the debut of Anthony Akumu in the team’s 1-0 Nedbank Cup last-32 win against Royal Eagles at FNB Stadium on Saturday night.

Middendorp said for Akumu at the moment it is about establishing combinations with his new teammates and understanding his positioning within the coach’s gameplans.

“Of course‚ we have seen some different patterns from Anthony. He came in after just more than three weeks.

“And OK‚ at the moment now it is to know the combinations – where to go and what to do. And it was just a first grab going into it‚ earning a little bit of experience.

“Percentage-wise‚ I don’t know actually. We have the options in the midfield with other players.

“We have used him even in a centreback position in training sessions – he was quite impressive and positive too.

“We have to find out at the moment. I can’t give an absolute assessment. We saw good touches‚ good understanding in tight spaces to be part of the combination play. Ja‚ let’s see.”

Ruzaigh Gamildien’s scorcher for Chippa United against TS Galaxy in the Nedbank Cup on Wednesday was a timely reminder of his qualities as he seeks ...
Sport
1 year ago