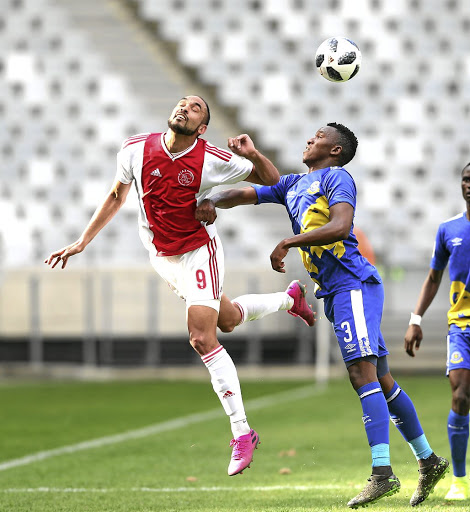 Eleazar Rodgers of Ajax CT fights for the ball with a Tshakhuma Tsha Madzivhandila player in a previous game.
Image: Carl Fourie/Gallo Images

This is according to the Urban Warriors veteran striker Eleazar Rodgers, who has already netted an impressive five goals from 11 games. The lanky marksman joined from Free State Stars before the start of the campaign.

Occupying the fourth spot on the GladAfrica Championship table, Ajax gave second-placed JDR a reality check by beating them 2-0 on Friday, thanks to Abednigo Mosiatlhaga's brace at Athlone Stadium.

"Our primary goal is to play in the big league next season and winning against top teams like JDR gives us more confidence that we can achieve our goals,'' said the 34-year-old Rodgers.

"You need to beat the best to be the best. Beating teams who are leading the pack is always important.to close the gap and boost confidence.

"We should just continue to work hard and stay grounded,'' he said.

Ajax coach Andries Ulderink gave his impression on their performance against JDR: "I thought in the first half we controlled the game, had a couple of good spells, created three, four moments were we threatened in the box.''

"But I thought we missed at least seven or eight moments were we should go quicker forward, a little bit more runs behind the defence, to really make it more difficult for the opponents,'' said Ulderink.

Before their showdown with JDR, the Urban Warriors had been inactive for four weeks.

Their games were postponed as four of their players in Thendo Mukumela, Keagan Johnson, Darren Johnson and Grant Magerman were with the SA Olympic side at the Under-23 Africa Cup of Nations (Afcon) in Egypt last month, where they finished third to qualify for next year's Olympics in Tokyo, Japan.

Kaizer Chiefs reaction to league title talk: Keep inside the bubble so it doesn't burst

Kaizer Chiefs are blocking out peripheral noise that they look a team capable of winning the 2019-20 Absa Premiership title‚ midfielder George ...
Sport
2 years ago
Next Article