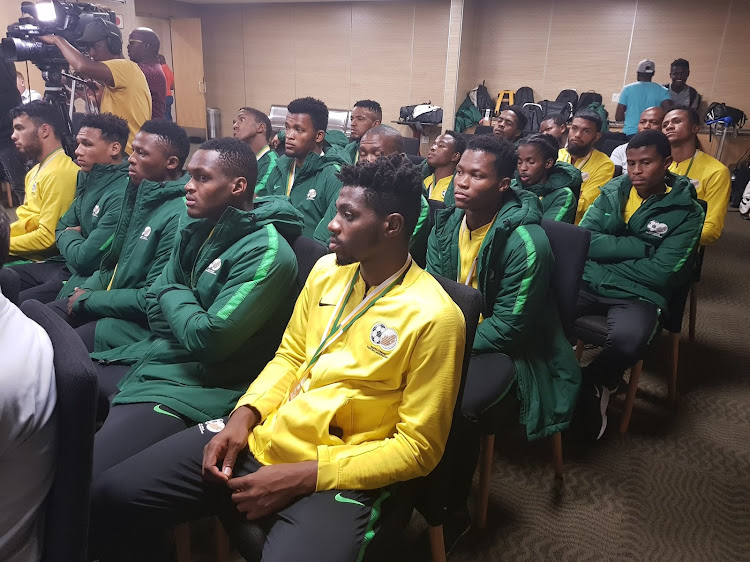 SA Under-23 players focused during a media briefing at OR Tambo upon their return from Egypt.
Image: Safa/Twitter

Mondli Mpoto’s penalty-saving ability played a key role in his selection for the South African Under-23s’ heroic victory on Friday against Ghana that saw them qualify for the 2020 Tokyo Olympic Games‚ after he had not played in the previous four Under-23 Africa Cup of Nations matches.

The selection of the big‚ athletic 21-year-old Bloemfontein Celtic keeper for the third-place playoff at Cairo International Stadium paid off for coach David Notoane.

Mpoto’s giant presence between the posts clearly put the Ghanaians off as he pulled off two crucial‚ excellent saves in the dramatic 6-5 penalty shootout victory to earn South Africa the bronze medal‚ and a place at Tokyo 2020.

Mpoto had gone into the tournament carrying an injury‚ and Ajax Cape Town keeper Darren Johnson kept a clean sheet in the Group C 0-0 draw against Zambia‚ 1-0 win against Ivory Coast and 0-0 draw against Nigeria.

Johnson was unfortunate to concede three in the 3-0 semifinal defeat against hosts Egypt where refereeing decisions went against the South Africans.

Notoane and his coaching staff‚ aware that the playoff against Ghana might well go to penalties‚ brought back Mpoto‚ who had starred in two penalty shootouts as the SA Under-23s won the plate at the 2019 Cosafa Cup in Durban in June.

“Mondli Mpoto‚ who held the No 1 jersey throughout the qualifiers‚ came into the tournament injured‚” Notoane explained of the tactical goalkeeping switch.

“We had assessed that it was the kind of injury that could be resolved during the tournament. The medical team really worked hard on that.

“Darren Johnson‚ who had been waiting for his opportunity‚ grabbed it and ran with it‚ up until we had a big headache of choice going into our final match.

“Because‚ really‚ Darren put in a splendid performance – the only keeper going into the semis who did not concede a goal.

“But when we looked at the probabilities and possibilities before us we also knew that Mondli is also very good with penalties.

“He’s a giant standing in those goals. And we have seen him doing the same at Cosafa.

“We spoke with the goalkeeper-coach [Lucky Shiburi]‚ and came to the conclusion that‚ ‘Let’s go with Mondli’. And it paid off.

“And I think it shows the depth we have in our goalkeeping department going forward.”

This is SA’s second Olympic qualification in succession‚ having also competed in the men’s competition at Rio 2016.

Patrice Motsepe is not only one of the richest men in South Africa‚ but also has a say in how two of the most successful sporting entities based in ...
Sport
2 years ago