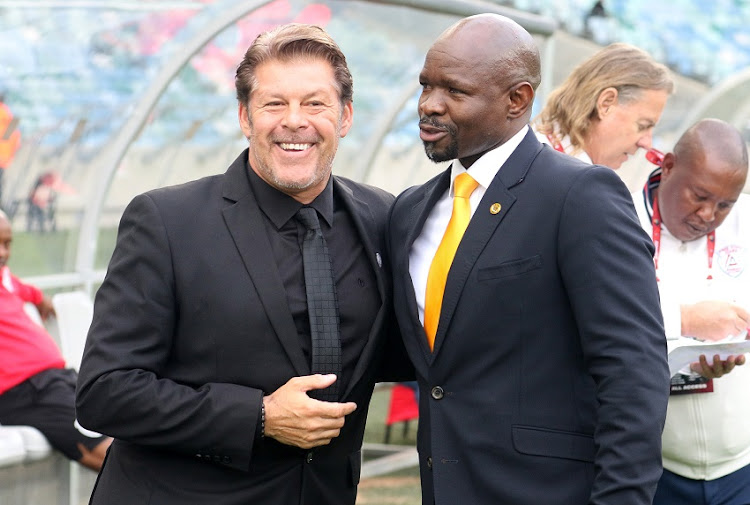 There will be no live television cameras there to record the moment but it likely to be an awkward meeting in Thohoyandou on Saturday when Luc Eymael and Steve Komphela come face to face.

Black Leopards host Lamontville Golden Arrows on Saturday in Premier Soccer League (PSL) action but the frosty relationship between the two coaches will attract the most attention‚ even if Eymael attempted on Friday to play it down.

“It is Leopards versus Arrows‚ it is not Eymael versus Komphela‚” he told SowetanLIVE.

“He is a very good coach – I have nothing else to say about that.”

Komphela’s dislike for the self-promoting Belgian coach was given an extraordinary public airing in an outburst that transcended the usual boundaries that keep private the feuds between rival coaches.

It was in September when a return to the PSL was being mooted for Eymael at AmaZulu‚ after a poor start to the season had placed Cavin Johnson’s tenure under threat.

At the post-match press conference after a 1-1 draw between Arrows and AmaZulu‚ Johnson was asked whether he felt confident about keeping his job amid reports that Eymael‚ and the Slovakian coach Jozef Vukusic‚ were waiting in the wings to take over at Usuthu.

But before Johnson could answer‚ Komphela jumped in with a strong opinion about Eymael.

The Arrows boss said Eymael had been disrespectful by trying to take jobs away from other coaches.

“I don’t have ethics if I’m looking for your job while you are still employed.

“I’ve got no respect and ethics if my bosses ask what you thought of the game and you say ‘Ah‚ your team plays rubbish’‚ or whatever.

“No! What is said in private must be said in public too. The honourable Lord must just stay where he is‚” Komphela continued.

Johnson did lose his job but it was Vukusic who took over. Eymael‚ rather‚ was then appointed by Black Leopards just weeks after Komphela’s outburst.

Komphela and Eymael’s feud stems back to when the former was coach of Kaizer Chiefs‚ and the latter‚ then coach of Free State Stars‚ was linked to the Amakhosi job at the time.

After guiding Stars to winning the Nedbank Cup at the end of the 2017-18 season Eymael appeared to take a dig at Komphela – who has not won a trophy – saying: “It’s now only my second year in South Africa‚ and I’ve already won a trophy – I know some guys who have worked 13 years here and have not won a trophy.”

Saturday’s game in Thohoyandou is not being televised live by either SuperSport or the SABC‚ with the broadcasters missing perhaps the story of the weekend.