Eric Tinkler is man with a plan for on-form Amakhosi 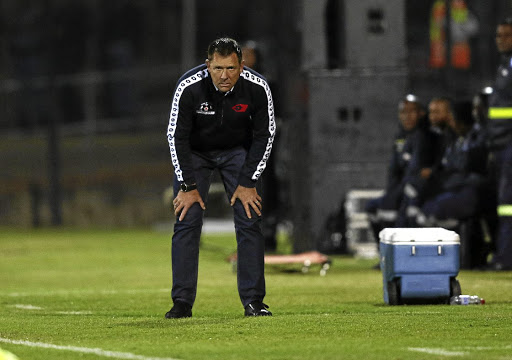 Coach Eric Tinkler of Maritzburg United is looking for cup glory with the Team of Choice. / Anesh Debiky/Gallo Images

Maritzburg United coach Eric Tinkler appears to have a tactical masterplan up his sleeve that can propel his team against the inform Kaizer Chiefs.

United and Chiefs will square off for a spot in the final of the Telkom Knockout in Mbombela on Sunday (3pm).

Tinkler has plotted cup successes with Cape Town City and SuperSport United in the past and is looking to do the same with the Team of Choice.

"We've got ourselves to this phase of the competition by working hard and keeping clean sheets, so that become very important against a good team like Chiefs," Tinkler said. "Defensively we need to be solid and we need to capitalise on whatever mistakes they make.

They are going to have a central defensive pairing that hasn't worked together [with Eric Mathoho suspended]."

Maritzburg United coach Eric Tinkler wants his charges to be ‘brave’ when they face on-form Kaizer Chiefs in the semifinals of the Telkom Knockout at ...
Sport
2 years ago

Amakhosi are the team to beat this season as they are on top of the league and in the semis of the R4m cup.

Tinkler admits that the Soweto club is having best season in years.

"It's a different team from last season. They have new faces like Samir Nurkovic who has brought something different and they are a more direct team because of the height he provides upfront and Leo Castro as well."

United will be tested in their first away game in the competition this season. The showdown at the Mbombela Stadium will surely favour Chiefs.

"No matter where Chiefs go, it's a home game. They don't have the best record at the FNB Stadium and we would have preferred to play them there.

"Mbombela is a fantastic stadium and the surface is going to be great and that helps with the kind of football we want to play."

Having dispatched of some big-name opposition in the Telkom Knockout, Kaizer Chiefs need to keep their focus in Sunday’s semifinal against supposedly ...
Sport
2 years ago

'It's a good time to face Kaizer Chiefs'

Maritzburg United marksman Judas Moseamedi, 25, is pinning their hopes of overcoming Kaizer Chiefs in the Telkom Knockout on their recent splendid ...
Sport
2 years ago

Ex-Orlando Pirates coach Eric Tinkler says incumbent Rulani Mokwena must stay strong in spirit and avoid distractions if he is to find his feet in ...
Sport
2 years ago
Next Article