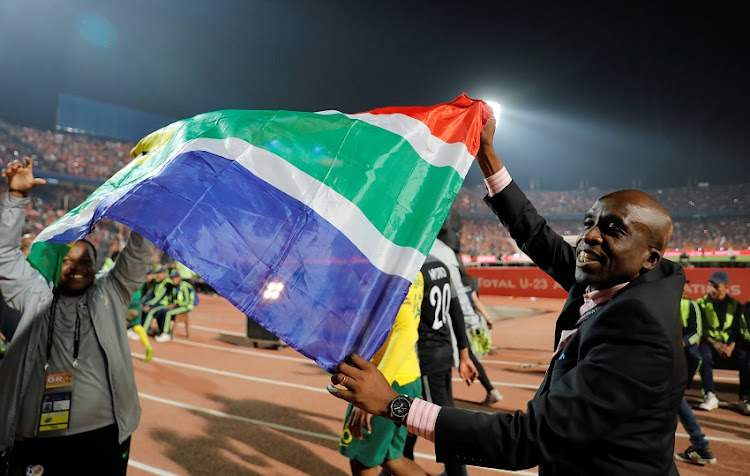 South Africa coach David Notoane celebrates after they win a penalty shootout against Ghana at Cairo International Stadium on Friday in the third-place playoff at the Africa Under-23 Cup of Nations.
Image: REUTERS/Amr Abdallah Dalsh

South Africa Under-23 coach David Notoane has called on the South Africa Football Association (Safa) and the Premier Soccer League (PSL) to hatch a plan that will give him the best possible chance to prepare the side for the Tokyo 2020 Olympic Games.

South Africa came through a nailbiting penalty shootout win over Ghana at Cairo International Stadium on Friday in the third-place playoff at the Africa Under-23 Cup of Nations to ensure the side completed back-to-back qualification for the Olympics after they also appeared in 2016.

But Notoane is well aware that he will now face a huge challenge in trying to pry players away from their clubs for matches to adequately prepare the side for the July 22 to August 8 competition.

Coaches will not only be loath to lose players for preseason and the start of the 2020-21 PSL season‚ but also are likely to be a hindrance as Notoane tries to organise fixtures in the first half of the year to get his side ready.

He will know that he has no price with the overseas-based clubs‚ but hopes some semblance of patriotism is shown by the PSL teams – whose players would also benefit greatly from being at the Olympics.

“We now have to go back to the drawing back and prepare for the bigger stage at the Olympics‚ which comes in the period of July to August‚” Notoane said.

“There are challenges – there is a domestic league‚ unlike in Egypt where the FA [Football Association] stops the league from continuing.

“If I check my calendar then there is only one Fifa break‚ so I hope that I will get support from the FA‚ from the professional clubs‚ to make sure we have a lot of preparation matches and the players available for them.”

It was scandalous that Notoane left for the continental qualifier in Egypt with 15 players‚ which included three goalkeepers‚ as self-serving clubs refused to release players for the start of the competition that fell outside of the Fifa window.

“Our domestic competition will end in May‚ so that is a big headache I am facing. I came into this tournament with a big headache and I am going home happy‚ but with another headache‚” the coach said.

“Hopefully we will find synergy between the FA and the professional league to give this team better preparation.”

South Africa qualified for a third Olympics in all after previous appearances in Sydney in 2000 and Rio de Janeiro in 2016.