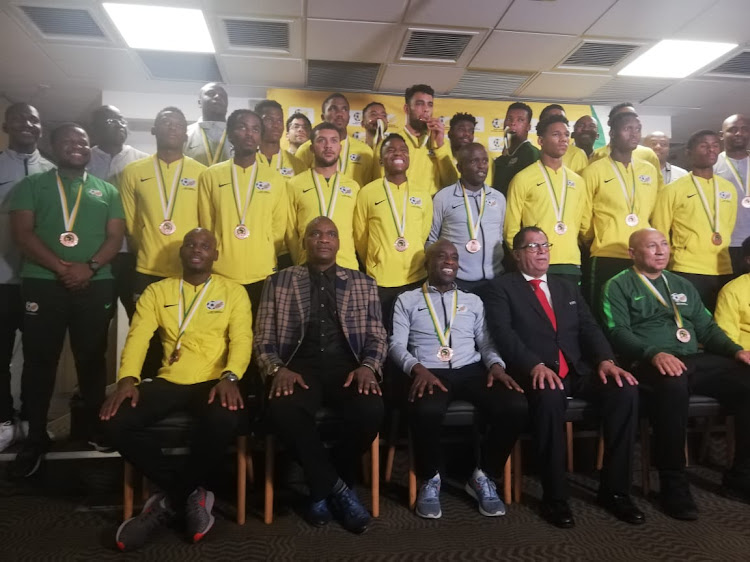 The South African Under-23 side pose for a team picture on their arrival at OR Tambo International Airport on Saturday from the U-23 Africa Cup of Nations in Egypt, where they finished third to qualify for the 2020 Olympics in Tokyo. Bafana Bafana coach Molefi Ntseki (centre, left), U-23 coach David Notoane (centre) and Safa president Danny Jordaan (centre, right) are in the front row.
Image: Marc Strydom

South Africa Under-23 coach David Notoane praised his players on their arrival back on Saturday from earning Olympic qualification in Egypt on Friday‚ on the mental fortitude they showed dusting themselves off from a dramatic defeat to the U-23 Africa Cup of Nations (Afcon) hosts on Tuesday.

The South Africans‚ after refereeing decisions went against them in Tuesday’s 3-0 semifinal defeat against eventual champions Egypt‚ lifted themselves to beat Ghana 6-5 on penalties in the U-23 Afcon’s third-place playoff at Cairo International Stadium on Friday.

This was after a dramatic 2-2 draw by the end of normal time when the South Africans twice held the lead‚ but Ghana twice fought back.

Safa president Danny Jordaan was present at OR Tambo International Airport on Saturday afternoon to welcome the U-23s back‚ their third place having secured qualification for the 2020 Olympics in Tokyo.

“I present before you today this group of people who have worked so hard over the last six or seven months‚ when we started on this Olympic dream‚” Notoane told the welcoming press conference.

SA U23 coach David Notoane gets a quiet greeting from @BafanaBafana coach Molefi Ntseki, @SAFA_net president Danny Jordaan, and his kids, returning from qualifying the U23s for the #Tokyo2020 Olympics pic.twitter.com/s1JDcnfEdX

“Thanks to the players first and foremost‚ because they are the ones out there who do the hard work‚ for a splendid team performance‚ and the sacrifices – the hard work‚ the sleepless nights‚ the video analysis.

“The first target‚ of course was to conquer Africa. That was our big dream. And on Tuesday we saw our dream fade before us in dramatic fashion in our match against Egypt.

“That’s football. We accepted that‚ we dusted ourselves off‚ we collected ourselves emotionally from that draining occasion.

“We faced Ghana in the playoff. Then we were only left with one target – which was to qualify for the Olympics.

“And I’m proud and happy to say that the mission that you [Jordaan] sent us on‚ we were able to deliver on.”

The SA U-23s began their path to Olympic qualification sweeping aside Angola 6-1 on aggregate‚ then Zimbabwe 5-0‚ in the Nations Cup qualifiers.

They drew 0-0 in their Group B opener against Zambia in Egypt‚ beat Ivory Coast 1-0‚ and drew 0-0 against Nigeria.

This is SA’s second Olympic qualification in succession‚ having competed at Rio 2016.