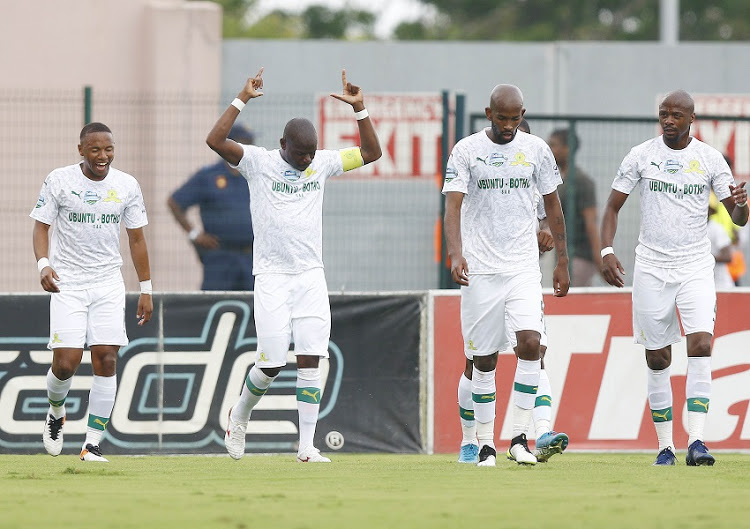 The wait for his first ever cup as a top-flight coach continues for unlucky Golden Arrows mentor Steve Komphela.

This is after his determined side were beaten 2-1 by Mamelodi Sundowns in the Telkom Knockout semifinals at Sugar Ray Xulu Stadium on Saturday.

Downs will now meet the winner of Sunday’s (24 November) second semifinal between Kaizer Chiefs and Maritzburg United at Mbombela Stadium. Prior to the game, Komphela, who is close friends with Downs counterpart Pitso Mosimane, made it clear that he was praying for rain to pour in Clermont.

Heavy showers aided them to record a 3-2 victory over the same Brazilians side in a league match two weeks ago. The football gods never answered Komphela’s wishes, as clear skies and sunshine were the order of the day at the stadium.

The Brazilians showed their determination to win the game from the word go, utilising the creativity of “stressed” Gaston Sirino and the manpower of midfield duo of Andile Jali and captain Hlompho Kekana to dismantle the home side.

Coming into this game, Sirino hogged the headlines for his no-show at a meeting with the Premier Soccer League (PSL) Disciplinary Committee on Monday.

The league charged the skillful Uruguayan midfielder with‚ “contravening Rule 54.3.13 of the [National Soccer League] Rules” for allegedly slapping SuperSport United’s Clayton Daniel during his team's 2-0 MTN8 semifinal second leg defeat at the hands of Matsatsantsa in September.

His representatives told the league’s prosecutor Nande Becker that the player was “stressed” and was unable to attend the matter, prompting the football governing body’s attorney to postpone the hearing for Wednesday.

Surprisingly, Sirino looked lively in the first half, mesmerising the Arrows rearguard like a hot knife through butter, until he was given his marching orders for a deliberate stomp on Arrows skipper Trevor Mathiane, six minutes before the end of regulation time.

Before the incident,  the Downs maestro had cherry-topped his fine display with a goal, doubling the visitors’ league in the 36th minute after Kekana had broken the deadlock some 25 minutes earlier.

Lyle Lakay was another Downs’ live wire in the first half, constantly switching flanks with Siphelele Mkhulise, who’s been in blistering form since he stepped up for injured Themba Zwane in the past few games.

Arrows pulled one back through Nduduzo Sibiya in the 84th minute. Sundowns now shift their attention to another KZN side in the form of AmaZulu, hosting them in a league encounter at Loftus Versfeld on Tuesday.

Meanwhile, Abafana Bes’thende travel to Peter Mokaba Stadium to trade blows with Baroka on Wednesday in another league showdown.