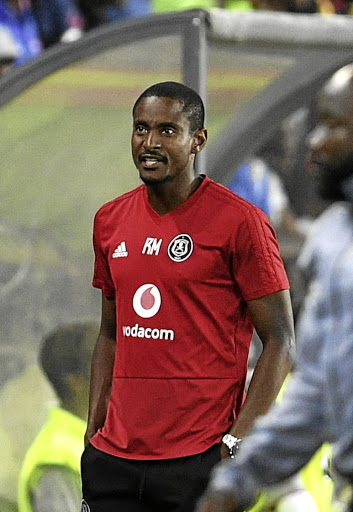 Having personally walked this path before at Orlando Pirates, Eric Tinkler has given Rulani Mokwena some words of advice on being the coach of the Soweto giants.

Like Mokwena, Tinkler had his very first stint as a head coach at the Buccaneers some four seasons ago after Roger de Sa quit.

Tinkler had never been a head coach before despite his vast experience being a development coach and an assistant at Bidvest Wits and Pirates.

Mokwena has also been thrown into the deep end of taking charge of the first team after the exit of Milutin Sredojevic in August.

"I don't know Rulani well enough to comment on him as a person. But from what people have told me, he is hard working which is what I was. I spent a lot of time with the youth, which helped me," Tinkler said.

"Being at a club like Orlando Pirates, knowing where you are is very important. There's expectation, demand and pressure and not taking things to heart. You must remain humble and focus on what your primary job is and not the secondary things."

Despite his previous lack of experience as the head coach, Tinkler went on to have success. He led Bucs to the CAF Confederation Cup final and has won silverware with Cape Town City and SuperSport United.

Rulani gives his 'beast' a chance
Sport
2 years ago

Tinkler has managed to stabilise Maritzburg's form. The Team of Choice have climbed from the bottom end of the table and currently have 12 points from nine games. They are also through to the last four of the Telkom Knockout where they face Kaizer Chiefs later this month.

Their signing of Jeremy Brockie on loan from Mamelodi Sundowns has not had the effect the club had hoped for. Brockie has missed a number of scoring chances in the five games he has featured in all competitions.

Tinkler spoke in support of the misfiring New Zealander and expressed confidence that the goals will come.

"It's obvious that we brought Jeremy to score goals. Since he has been in the starting line-up we haven't lost.

"Sometimes it's not about the goals but it's about what he's doing in order for us to collect maximum points. He works extremely hard to score goals."