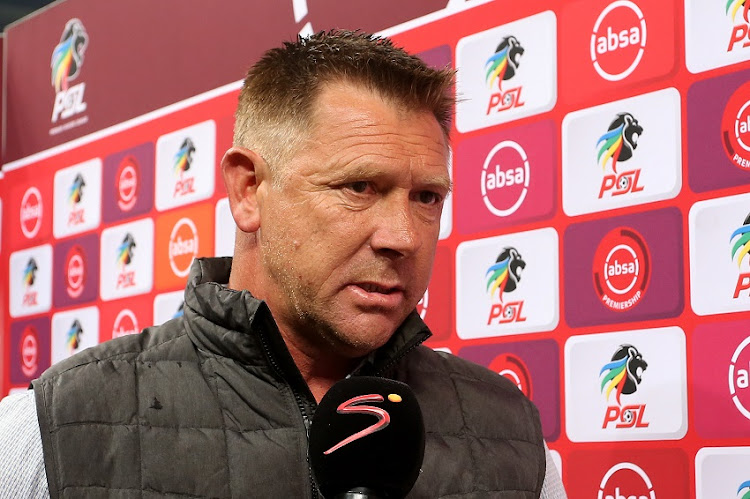 Ex-Orlando Pirates coach Eric Tinkler says incumbent Rulani Mokwena must stay strong in spirit and avoid distractions if he is to find his feet in the job.

“A club like Orlando Pirates has expectations‚ demands and pressures and you have to be capable of dealing with it.

“I think that’s very important‚” said Tinkler as Mokwena faces a second derby against Kaizer Chiefs in seven days‚ with his club already 12 points behind their archrivals in the Absa Premiership standings.

Pirates meet Chiefs in the league at FNB Stadium‚ having lost on penalties after a 2-2 extra-time thriller in last Saturday’s Telkom Knockout quarterfinal at Moses Mabhida Stadium.

Current Maritzburg United boss Tinkler had two separate stints in charge of Pirates‚ first as caretaker after close friend Roger de Sa departed and then again when Vladimir Vermezovic packed up and left.

Tinkler will know much of what Mokwena is going through‚ although the two are barely acquainted.

“I don’t know him well enough to comment on him as a person but I know from what people have told me is that he is extremely hard-working‚ which is what I was‚” Tinkler said.

“I spent a lot of time with the youth and I think that helped me‚ coming through the different levels.

“Obviously knowing where you are is very‚ very important.

“I also think not taking things to heart‚ stay humble‚ focus on what your primary job is and ignore those secondary things‚ the things that you have no control over.

“That’s the advice I can give him. Just stay strong and deal with the pressure. It’s part and parcel of being coach at Orlando Pirates.”

Mokwena has been in charge since Milutin Sredojevic’s surprise departure just weeks into the new season and has won three‚ lost three and drawn six of his 12 games in charge.