'It's a good time to face Kaizer Chiefs' 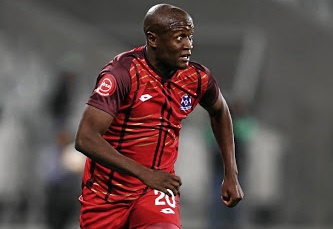 Maritzburg United marksman Judas Moseamedi, 25, is pinning their hopes of overcoming Kaizer Chiefs in the Telkom Knockout on their recent splendid form.

Having gone seven games without defeat, with five victories and two stalemates across all tournaments, Maritzburg face what looks like a real moment of truth when they entertain Chiefs in the TKO semifinals at Mbombela Stadium on Sunday (3pm).

The last time the Team of Choice experienced a loss was against Mamelodi Sundowns in the league, going 2-1 down in September.

"With our current form, ke nako egrand [it's a good time] to face Chiefs. We've been winning and our confidence is sky high, so we rely on the very same confidence against Chiefs," said Moseamedi.

"We've been preparing for the Chiefs game the same way we did for all our past games, and we focus on ourselves not them. The aim is to win at least one cup this season and we have a chance to do that with the Telkom Knockout."

Jeremy Brockie is now fully fit and raring to go‚ according to Maritzburg United coach Eric Tinkler‚ but if he is finally going to break his goal ...
Sport
1 year ago

The TKO trophy is the only silverware Moseamedi has ever won in his career. Interestingly, the lad from Tzaneen in Limpopo lifted the Telkom Cup under his current coach Eric Tinkler, while they were still at Cape Town City in the 2016/17 season.

"As players, it's always easier to play under someone who has faith in you. Coach Tinkler believes in me," noted the Maritzburg striker.

The Sundowns defeat proved a wake-up call for Maritzburg as after it they claimed back-to-back 1-0 wins against Chippa United and Baroka FC, before dumping Bidvest Wits out of the TKO in the first round via a 3-1 win post 1-1 extra time draw.

Eliminating the Clever Boys out of the cup competition was followed by a 1-0 league win away to the Citizens. Next were Highlands Park in the TKO quarterfinals, the Team of Choice won 4-3 on penalties after the match had ended 1-1 in extra-time.

In their past two matches, Maritzburg drew 0-0 and 2-2 against Orlando Pirates and Bloemfontein Celtic in the league, respectively.

A day after completing a new two-year contract with coach Eric Tinkler‚ Maritzburg United further strengthened their playing squad with the addition ...
Sport
2 years ago

After substantiating their survival credentials by outwitting SuperSport United in a 3-1 win at the weekend, Maritzburg United coach Eric Tinkler has ...
Sport
2 years ago

Hard to kill Maritzburg United showed they will fight to the last game to stay in the Absa Premiership as they kept in touch with fellow relegation ...
Sport
2 years ago
Next Article