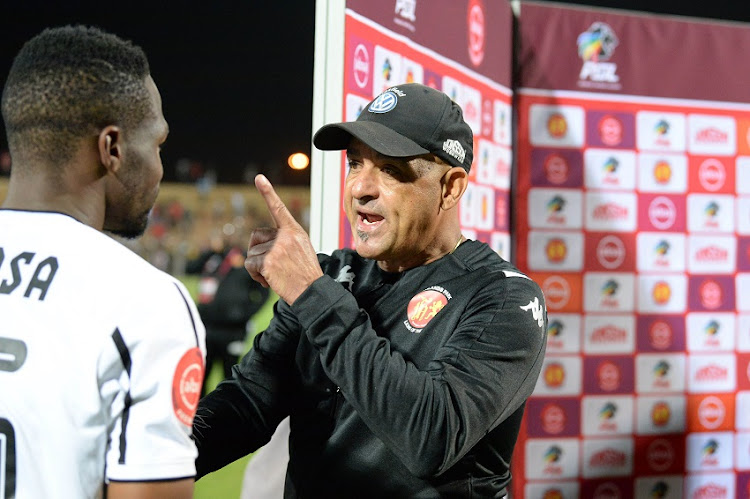 Highlands Park coach Owen da Gama has joined the bandwagon of recent furious condemnation of match officials after his side lost 1-0 against Orlando Pirates through a controversial goal in Tembisa on Tuesday night.

Pirates’ striker Tshegofatso Mabasa was clearly at least a metre offside when he received a pass from Linda Mntambo before toe-poking it past advancing Highlands goalkeeper Thela Ngobeni in the Absa Premiership match-up at Makhulong Stadium.

Mabasa probably also should have been sent off in the first half for a seemingly outrageous foul against Highlands midfielder Linokuhle Mbatha.

But assistant-referee Buyisile Ngqambiyana at the far end of the field failed to flag Mabasa and the Buccaneers’ striker banged in his fifth league goal of the season‚ and the 80th-minute winner for Pirates.

An enraged Da Gama was so furious with Ngqambiyana that he called for the official to be locked up.

“First and foremost it was three meters offside‚” said a livid Da Gama.

“The linesman on this side of ours and the referee were good. I thought they did a very good job‚” said Da Gama‚ before lashing out at second assistant Ngqambiyana.

“But that linesman on the far side‚ guys‚ I think he should go to jail. You can’t do that at this level of the game.

“People’s lives are at stake here. The players are working for their families. They work hard all week for somebody to do something like that?

“I mean if it’s a 50/50 situation you can understand but for a three-meter offside like that‚ I mean that’s shameful for football in our country and something has got to be done about this‚” bemoaned Da Gama.

The Highlands coach said Ngqambiyana admitted to an earlier “error” made in the first half when Da Gama had confronted the official during the break.

“It’s the very same linesman who‚ in the first half‚ Pirates head the ball and he raises his flag for offside. When I confront him at half time he says‚ ‘It was a mistake’. I mean‚ please guys.

Da Gama also complained that Mabasa should have been sent off for an early shower for what did seem a potential straight red card offence with a two-footed studs-up challenge on Mbatha in the first half.

“I think that was a red card. It was a two-footed tackle and Mbatha had to get an injection at half time‚ and he never recovered from that‚” the coach said.

Mbatha was substituted off with 20 minutes remaining.

“I spoke to Mabasa after the match and I told him that‚ ‘You can’t play like that‚ you can’t tackle people with two feet – you will end their careers’‚” Da Gama said.

“And he said‚ ‘But the player [Mbatha] jumped’. I told Mabasa that it doesn’t matter. If the player hadn’t jumped he would have broken his leg.”

Pirates and Highlands now switch focus from the Absa Premiership to the Telkom Knockout quarterfinals.