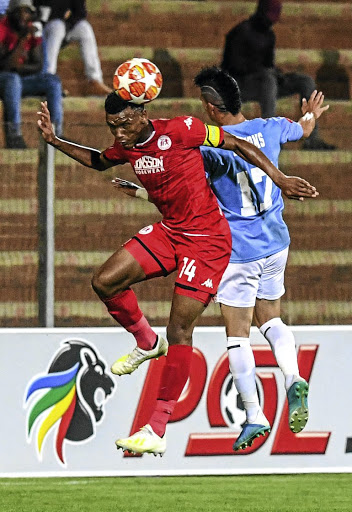 Mothobi Mvala of Highlands Park and Gregory Damons of Chippa United during their game on Saturday.
Image: Sydney Seshibedi/Gallo Images

As much as Highlands Park coach Owen da Gama flays his players when they underperform or commit terrible mistakes, the former footballer also gives them credit when they produce the goods.

It was the case at Makhulong where his charges bagged three valuable points that moved them to the fourth spot in the Absa Premiership table after convincingly defeating Chippa United
2-0.

The Chilli Boys are still to taste victory after nine games and remain rooted at the bottom of the standings.

"The boys were very spirited after their last-minute loss to Mamelodi Sundowns in a game we deserved to win [last week]. They were determined tonight and not only the results show but you saw how they conducted themselves," said Da Gama. "You could see that they wanted three points and they got them."

Highlands took the game to their opponents from the word go and raided Chippa's backyard relentlessly, forcing them to concede corners in a short space of time. Highlands had all their best players on the pitch - Tendai Ndoro and Peter Shalulile spearheading the attack, with Mlungisi Mbunjana marshalling the middle of the park.

Defender Given Msimanga put his side ahead in the 18th minute. His soft goal in front of a cluster of defenders was the result of a corner.

Ndoro increased the tally in the 67th minute.

Dama Gama added: "Mbunjana showed other players that when given the opportunity, you grab it with both hands."

The 29-year-old from Mount Frere, Eastern Cape, was duly voted man of the match.

"This is the second honours for him in three matches," said Da Gama. "He is fantastic. Ndoro stood out; scored and also had a hand in the first goal. But look, all the players worked very hard and deserve the credit."

Mbunjana said: "It's all about patience and to work twice as much as other players because you never know when you will play again. When you get to play, grab that opportunity with both hands."