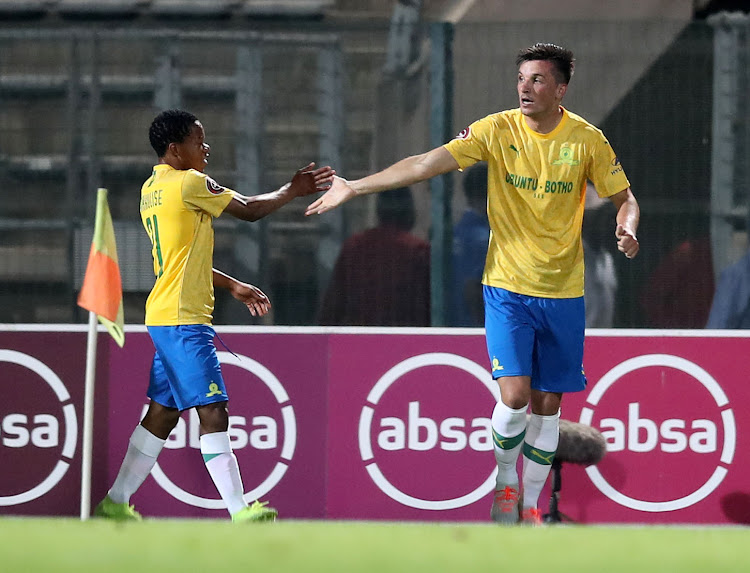 Mauricio Affonso celebrates with teammate Sphelele Mkhulise after scoring the only goal of the match.
Image: Samuel Shivambu/BackpagePix

The match looked to be headed for a lukewarm stalemate after both teams squandered numerous scoring opportunities but substitute striker Mauricio Affonso struck the decisive blow deep into referee’s optional time for the three points.

Sundowns, who went into this match on the back of a thumping 5-0 win over AmaZulu last weekend in the Telkom Knockout first round, were made to work by this indurtious Highlands side that was full of running.

As a result of this win Sundowns have moved to second spot on the log standings with 17 points from seven matches and they have closed the gap on current log-leaders Kaizer Chiefs to two points.

This win will also serve as a perfect morale booster for coach Pitso Mosimane and his men ahead of the hugely anticipated league clash against Chiefs at Loftus Stadium on Sunday.

This late drama unfolded in front of Chiefs coach Ernst Middendorp who was a keen spectator in Atteridgeville as part of his preparations for Sunday’s match.

For Highlands, they have dropped to sixth on the log with 11 points from seven matches and coach Owen da Gama will be looking for an improved performance when they host relegation-threatened Chippa United at Makhulong Stadium in Tembisa on Saturday.

Highlands were the first to threaten Sundowns when Bafana Bafana midfielder Mothobi Mvala’s shot rebounded off the upright with Kennedy Mweene beaten.

The Brazilians reacted quickly with an attack of their own and it ended with Thapelo Morena being denied by alert Highlands goalkeeper Thela Ngobeni.

Sundowns missed another opportunity to open the scoring after 27 minutes when Themba Zwane’s close range shot was saved by Ngobeni and a few minutes later another chance went begging when Hlompho Kekana ballooned his effort over the cross-bar.

Highlands came back stronger from the break with more purpose in their work but Sundowns goalkeeper Mweene responded equally to most of the threats from Mvala, Peter Shalulile and Mokete Mogaila.

Sundowns came close to scoring again after the hour mark when Morena’s effort hit the cross-bar from close range but Affonso had the final say with the goal that ensured the three points deep into optional time.

Moses Mabhida Stadium in Durban has been announced as the venue for the Soweto derby Telkom Knockout quarterfinal match-up between Kaizer Chiefs and ...
Sport
2 years ago
Next Article