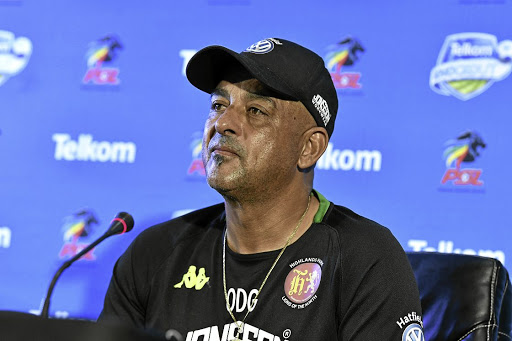 Expressive Highlands Park coach Owen da Gama has a strong feeling the lessons they learnt in the MTN8 final will come handy in their Telkom Knockout journey.

In what is their maiden competitive fixture since their 1-0 MTN8 decider defeat at the hands of SuperSport United three weeks ago, Highlands host Black Leopards in the first phase of the TKO at Makhulong Stadium on Sunday (3pm).

"We take a lot of strength from that cup final. We take a lot of learning curves and lessons. We try to improve consistently. We really want to give our best shot in the TKO," said Da Gama at a media conference at the PSL headquarters in Parktown yesterday.

"I believe that we've grown tremendously after the MTN8 final and those lessons should assist us through the TKO tournament. We must put them into practice."

SuperSport United defender Clayton Daniels is relishing the prospect of adding another trophy to the MTN8 cup they won after beating Highlands Park ...
Sport
2 years ago

The coach of the Lions of the North also revealed that his troops have recovered fully from the heartbreak of losing out on the R8m trophy.

"The mood [in camp] is much better. The players understand that you cannot win them all. They understand that if you don't win, you learn. We don't believe we lost that game, we believe that we created enough opportunities to have won but it wasn't our day," said Da Gama.

Highlands and Leopards were promoted from the National First Division at the same time, in the 2017/18 season.

They have met three times in the top flight, with all three matches ending in draws.

"The last time there was a result [in a math between the two teams] was in the NFD. We won 1-0 at Thohoyandou Stadium. After that, there've been draws," said Da Gama.

SuperSport United have opened talks with coach Kaitano Tembo over an improved contract after the mentor led the club to MTN8 title two weeks ago.
Sport
2 years ago

SuperSport United have confirmed that striker Thamsanqa Gabuza has returned to training after being given time off to mourn his son.
Sport
2 years ago

Sheppard focuses on development
Sport
2 years ago
Next Article