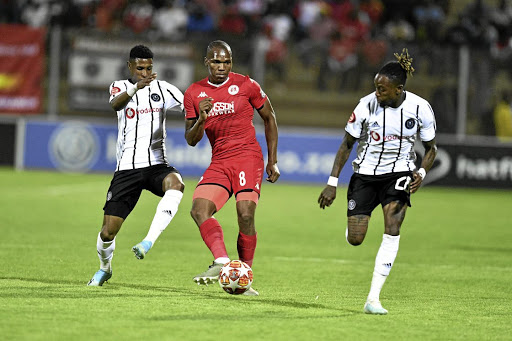 Vincent Pule of Orlando Pirates and Mlungisi Mbunjana of Highlands Park fights for the ball during their Absa Premiership match at at Makhulong Stadium last night.
Image: Lefty Shivambu/Gallo Images

Orlando Pirates arrested their slump and suspended the nagging suspicions of being potential relegation candidates by bagging three valuable points in their narrow 1-0 win against Highlands Park last night.

Pirates, who were on the 10th spot on the Absa Premiership table going into their ninth league match of the season, moved to the top-eight bracket.

There had been growing concern from Pirates fans regarding what seems to be their uninspiring campaign thus far in the new campaign.

But the win against the fourth-placed Highlands could have given them some hope of revival. The all-important goal was scored by Tshefagatso Mabasa in the 80th minute after he he was set up by Linda Mntambo.

The win will go a long way to inspire the Buccaneers as they take on traditional foes Kaizer Chiefs in the quarterfinals of the Telkom Knockout in Durban on Saturday.

It was something of a smash and grab, and with question marks over offside for the winner, but Orlando Pirates would have been relieved at a 1-0 Absa ...
Sport
1 year ago

Highlands' coach Owen da Gama used the same starting line-up that beat Chippa United 2-0 at the weekend. In the final analysis, if ball possession scores points, then Pirates would have won the battle via a unanimous points.

It was unclear what Pirates really needed to do to score after playing such a wonderful football throughout the first half. The visiting side took the game to the hosts from the onset, forcing Highlands to back-pedal under pressure.

The first, of their many attempts, saw Vincent Pule's glancing header went over the bar in the 14th minute. Justin Shonga flick at close range went just wide.

Highlands, finally, broke away Tendai Ndoro's effort went over the bar. The sleeping Lions of the Noth were now wide awake but failed to find the back of the net.

Orlando Pirates coach Rulani Mokoena will only start working on the planning and tactics for their two marquee clashes against arch rivals Kaizer ...
Sport
1 year ago

Rulani Mokwena rejected suggestions that Orlando Pirates might be plunging into crisis after the Soweto giants lost away at rookies Stellenbosch FC ...
Sport
1 year ago

The sight of Thato Mohlamme making a dashing run-in attack brings back nostalgic imagines of Benedict Vilakazi at his best at Orlando Pirates.
Sport
1 year ago
Next Article