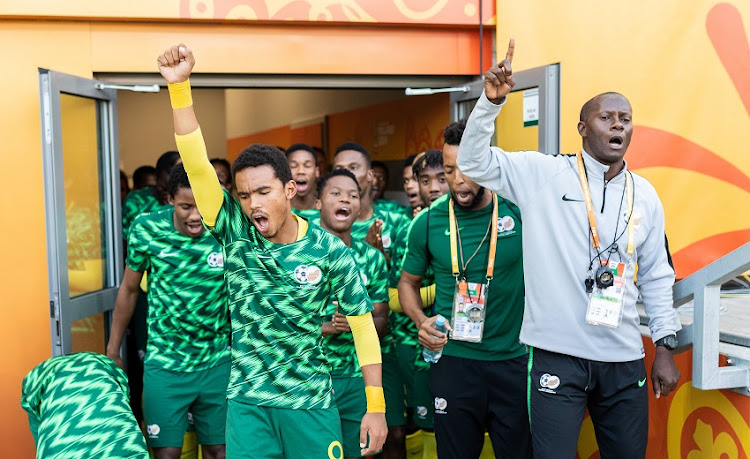 Players of South Africa sing while entering the pitch for warm-up prior to the 2019 FIFA U-20 World Cup group F match between South Africa and Portugal at Bielsko-Biala Stadium on May 31, 2019 in Bielsko-Biala, Poland. (
Image: Boris Streubel - FIFA/FIFA via Getty Images

The South African Football Association (Safa) spent a whooping R10m million on the SA Under-20 side ahead of their dismal participation at the Fifa World Cup in Poland.

Amajita‚ who are coached by Thabo Senong‚ crashed at the first hurdle and finished bottom of Group F with only one point from three matches.

“We have spend anywhere between R7.5m to R10m in getting them (Amajita) prepared for the World Cup‚” said Safa acting chief executive Russell Paul.

“It is our commitment to them‚ as you know you can’t budget for these things.

"You budget for teams getting into a particular position during the qualifiers and then when they qualify you need to restructure your budgets for tournaments.”

Senong's charges failed to emerge from the group stages following two defeats and one draw after conceding seven goals and scoring three.

History repeated itself in Poland as the South Africans finished bottom of their group in the previous World Cup tournament after defeats to Japan and Italy‚ and a draw with Uruguay‚ in South Korea two years ago.

While the team watched the round of 16 on Sunday and Monday on television after once again performing poorly‚ Paul was adamant that the money did not go to waste.

“It is money well spent because it is an investment into the future of these boys.

"Maybe one player from this group will be assigned to a professional team or he will be seen somewhere in the world.

"It will be an achievement for us and for the player and that is the responsibility to the nation.

"It will also be an achievement to the development of the game in the country and we will continue to create opportunities for these boys in the game.”

Paul also revealed that so far‚ Safa has spent over R20m on preparations for Banyana Banyana for the Fifa Women’s World Cup in France where they have been grouped with Germany‚ China PR and Spain.

“With Banyana Banayana‚ we have spent over R20m already and counting‚” said Paul.

Banyana Banyana go into their World Cup opener against Spain on Saturday after they were mercilessly routed 7-2 by Norway in their last preparation match on Sunday at Stade Moulonguet in Amiens‚ France.