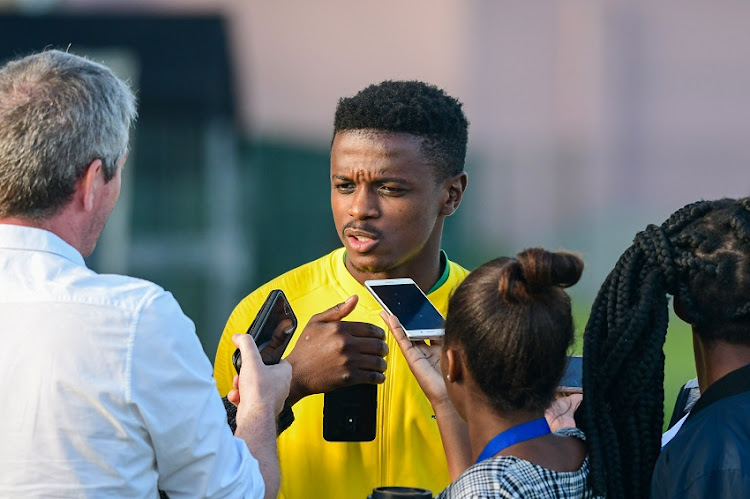 Coach David Notoane has called on his players to prove they have the makings of a “super” team as his largely Under-23 selection take on Botswana in the quarterfinals of the Cosafa Cup at the Princess Magogo Stadium on Sunday.

Goalkeeper Reyaad Pieterse is the only player in the squad who is not eligible for Notoane’s side who will compete in the African Under-23 Championship qualifiers against Zimbabwe in September‚ providing the rest with the opportunity to stake a claim.

The likes of midfielder Teboho Mokoena will also seek to keep himself in the frame for Africa Cup of Nations finals selection with a strong showing as South Africa seek to lift the Cosafa title for the first time in three years – when they also played with an Under-23 group in Namibia.

“It is a fantastic opportunity for them to test their character and see if they can carry the weight of being a Bafana Bafana player one day‚” Notoane said.

“Can they step up to Bafana level. Can they handle that pressure in Cosafa? If they do then we know we are in a good space going into 2022 and 2026 [World Cups].

“Do they have the makings of a super team? They have to answer to that. But my hunch says that we are on to a big thing with this bunch of players and looking at the Under-20s that are coming through.”

South Africa coach David Notoane says Phakamani Mahlambi asked to be released from the squad for the COSAFA Cup in Durban‚ suggesting he was not in a ...
Sport
2 years ago

Notoane has lost two key players this week in Phakamani Mahlambi (personal reasons) and Keagan Dolly (groin injury)‚ but says he cannot let the disappointment of losing those two derail his plans.

“Sometimes you have the best arsenal available to you. But sometimes you don’t and you have to find the right team balance and change your tactics and the way you play‚” he said‚ adding he was likely to use the full depth of his squad through the tournament.

“We have to try and give everyone a run without compromising the final output‚ which is the result‚” he said.

“We are representing Bafana. I said to the boys‚ it is a complex situation in that‚ yes‚ we are an Under-23 team that is coming in to enhance our preparation [for the African Under-23 Championship qualifiers].

Keagan Dolly asked to be a part of South Africa’s largely Under-23 squad at the Cosafa Cup as he seeks to reassure Bafana Bafana head coach Stuart ...
Sport
2 years ago

“And that afterwards‚ if we were to play tomorrow‚ we could say with our eyes closed that this is the [first-choice] 18 and this is how I would use them if we were going to a tournament.

“But having said that‚ we still have to represent the aspirations of the nation and giving the Bafana shirt a positive energy‚ especially going into Afcon. Because people are not going to say the Under-23s lost – they will say Bafana Bafana lost.”

Botswana have also brought a youthful team under caretaker-coach Mogomotsi Mpote‚ though there are some experienced old heads such as former Bloemfontein Celtic winger Joel Mogorosi and Township Rollers defender Mosha Gaololwe.

“We are going there to beat South Africa. We don’t have time to experiment. We cannot train players to lose and our aim is to win the trophy‚” Mpote said.

If South Africa advance to the cup semifinals they will face either Lesotho or Uganda in the semifinals on Wednesday. Defeat will see them drop into the plate competition‚ where they will face the loser of that tie.

Phakamani Mahlambi’s slim hopes of playing at the 2019 Africa Cup of Nations (Afcon) appear over after he was sent home from the South Africa camp ...
Sport
2 years ago

SA under-23 coach David Notoane is preparing to hold heart-to-heart talks with man-of-the-moment Zakhele Lepasa ahead of Bafana Bafana's ...
Sport
2 years ago
Next Article