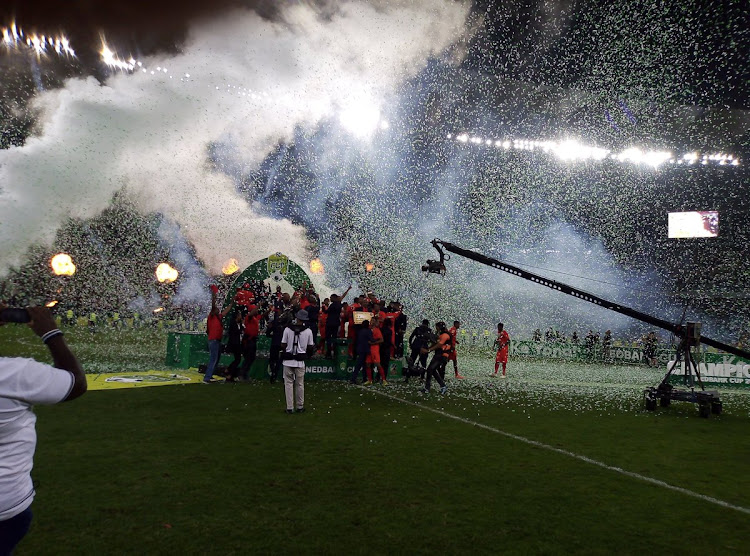 Ernst Middendorp future at the Kaizer Chiefs remain in huge doubt after yet another humiliating defeat, this time a 1-0 loss in the final of the Nedbank Cup at the hands of a National First Division side TS Galaxy at Moses Mabhida Stadium in Durban on Saturday evening.

Galaxy striker Zakhele Lepasa scored his fourth goal of the competition, sending Chiefs goalkeeper Bruce Bvuma the wrong way from the penalty spot after he was brought down by Teenage Hadebe inside the box on the stroke of full-time.

Middendorp came to this match already under a huge cloud and pressure after he failed for the second time as Chiefs head coach to ensure they finish inside the top eight.

Saturday night’s defeat add to the woes of a Chiefs team that is now close to an unprecedented four years without a trophy.

Chiefs came to this match after a 1-0 defeat against Chippa United that confined them to an unfamiliar finish outside the top eight for the third time overall in the PSL era.

Middendorp had to fend off questions about his future ahead of this match as some felt another defeat in final will seal his fate barely six months after re-joining the club in December, taking over from Italian coach Giovanni Solinas, who also didn’t do much to bring back the glory after Steve Komphela left having brought nothing for Amakhosi in three years.

Kaizer Chiefs’ poor run of late means even those who are supposed to back them to beat TS Galaxy in the Nedbank Cup final on Saturday’are doubtful of ...
Sport
3 years ago

Despite a disgraceful end to the season which saw Chiefs finishing the season on a back of a seven match winless run, Amakhosi still came to this match as favourites against Dan Malesela’s team that only has 10 months of existence and had just finished their first season in the second tier of SA football.

Malesela wrote his own history by winning the first trophy as a professional. He was the captain of Orlando Pirates 31 years ago when he won the same cup against the same Chiefs, who were also favourites in that match.

Galaxy were the first team to settle down in this match, the team from Kameelrivier in Mpumalanga confidently stringing a number passes with left winger Tembinkosi Mbamba and Sizwe Mdlonzo in the centre of the park, most instrumental in bringing their team into the game despite the discouraging noise from over 50 000 Chiefs fans among the 56 000 that filled the iconic stadium.

Played in a great atmosphere under the warm Durban weather with no wind nor clouds in the sky, Chiefs look more and more like the low tier team as Galaxy had the greater control of the proceedings and earned the first corner kick and shot of the match inside the first 30 minutes.

While Galaxy relied on their short passing to build up their moves, Chiefs tried to catch them on the break with long range balls but the Galaxy defence marshalled by Bathusi Aubass, Austin Dube and Terence Mashego, was alert enough to thwart those moves.

By just over 30 minutes some of the Amakhosi fans were already frustrated and booing some of the players as their team, which had previously won this trophy a record 13 times, looked out of shape and structure with no no.9 visible to gather the last ball and finish their moves.

TS Galaxy striker Zakhele Lepasa grew up in Snake Park in Soweto supporting Kaizer Chiefs and it was his soccer-loving mother Ohopolang Monyai who ...
Sport
3 years ago

Both Bernard Parker and Khama Billiat, who were deployed to operate as Chiefs strikers, often drifted wide and crossed to no one in particular in the box.

Chiefs’ best attempt on goal came right on the stroke of half-time when Parker’s shot was blocked for a corner after an inviting square ball from his striking partner Billiat in one of those quick counters.