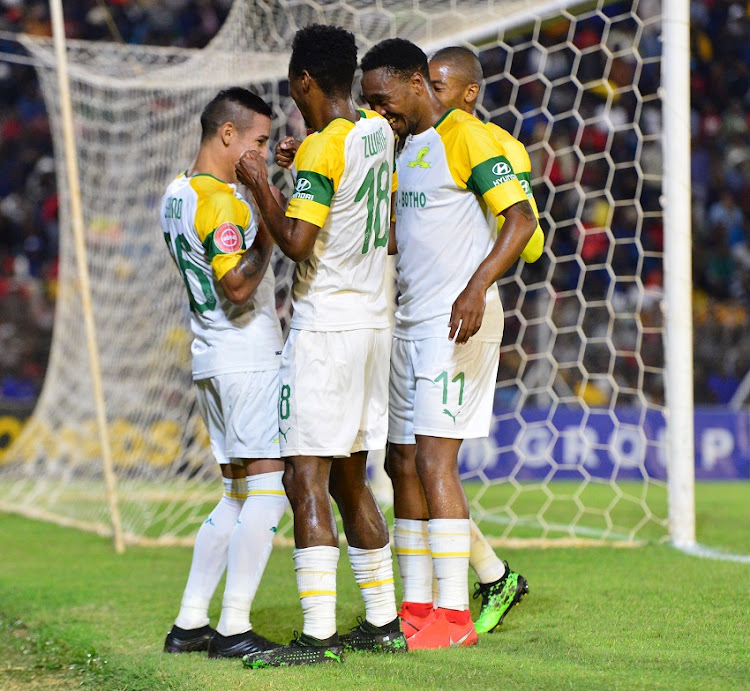 As was expected, the Absa Premiership race between two classy combinations is going to the wire, as Mamelodi Sundowns clinically saw off Black Leopards 2-1 on Tuesday night to draw level with leaders Orlando Pirates on 53 points.

Gaston Sirino in the 27th minute and Tebogo Langerman in the 68th gave patient Sundowns a 2-0 lead at at Thohoyandou Stadium.

Tumelo Khutlang pulled one back for Leopards in the 92nd.

Caf Champions League semifinalists Sundowns are behind Pirates on goal difference but not by far (+13 to +17).

Leopards coach Dylan Ker won the league's coach of the month in January, where his team won twice and drew once.

Since then, it has been a slide that has left the promoted team still very much threatened by relegation. Leopards (13th) have now won once in their last 13 games.

Tuesday's defeat left them rooted a position above the playoffs with 26 points and two matches to play, two points above Chippa United (15th) and three above last-placed Maritzburg United.

By keeping the pace and the temperature down on the field they calmed it in the stands too, at Leopards' renowned stronghold.

Downs were also aware of the stakes, and played things tight and precise.

The approach, and the carefully applied possession and rotation of the ball, resulted in a 1-0 lead by the break.

The Brazilians' opener came from a deadly ability to capitalise on a defensive error. From a punt upfield Leopards' big, not-overly mobile centreback Jean Munganga attempted a back-header to goalkeeper King Ndlovu that fell far too short. Sirino intercepted and with his first touch on the half-volley stabbed past Ndlovu.

Robert N'gambi's expert header just before the break was kept out by a fine save by Denis Onyango.

Sundowns continued to stroke the ball around at a calm pace after the break. They probed so gently, it might have lulled Leopards into a false security.

Like a scorpion's sting, Downs' movement, beginning with Sirino's turn on the right, for their second was impeccable and stylish.

It ended with Hlompho Kekana releasing Thapelo Morena down the right, whose cross was floated to the far side to pick out the run of Langerman, who volleyed past Ndlovu.

Leopards, relegation-threatened as they are, needed the points. They upped the ante as, in 77th, Onyango had to save and two players had to clear off the line.

Leopards deserved a goal from the game. They got it in added time when Karabo Tshepe beat Langerman down Downs' weaker left, Onyango spilled the squared ball and lively midfielder Tumelo Khutlang scrambled over the line.