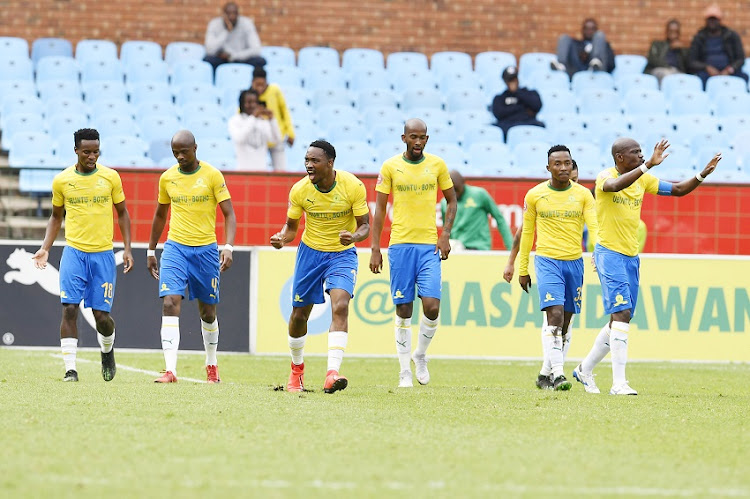 Mamelodi Sundowns came from a goal down to beat Chippa United 3-2 at Loftus Versfeld on Tuesday afternoon and move level at the top of the Absa premiership table‚ just behind leaders Orlando Pirates on goal difference.

Mark Mayambela put the struggling Eastern Cape side ahead but Hlompho Kekana‚ Sibusiso Vilakazi and Gaston Sirino all scored to turn it around and keep the holders on course to defending their title.

Rhulani Manzini pulled one back with six minutes to go to make Sundowns sweat for their points.

The afternoon game‚ rearranged to allow Sundowns to catch an 8.30 flight to Morocco for Friday’s African Champions League clash against Wydad Casablanca‚ was a potential banana skin but the champions came through in the end.

Pitso Mosimane surprised by keeping all but one of the starting line-up from a bruising trip to Polokwane over Easter and although Sundowns did pass the ball around‚ it was without the customary crispness.

But they did have an early chance for Musa Lebusa‚ who found himself free at the back post‚ but put it into the side netting from close range.

Chippa‚ with suspensions‚ injuries and an eye on Friday’s home game against Cape Town City‚ made eight changes from the weekend Nedbank Cup semifinal loss to Kaizer Chiefs and sat waiting for chances on the counter-attack‚ which came more frequently than they might have initially anticipated.

First though Bangaly Keita‚ making his debut for the Port Elizabeth club after his January move from Free State Stars‚ missed a back post opportunity and then Manzini scooped his shot‚ on the break‚ well over Kennedy Mweene’s goal.

But the goal did come on the counter in the 25th minute with Tebogo Makobela tearing down the right‚ pulling inside and then seeing the ball fall for Mayambela‚ who had time to turn and place his shot perfectly with his left.

But Chippa then retreated onto the back foot and invited Sundowns to come at them in a dangerous ploy which ultimately proved costly.

Sundowns’ 43rd minute equaliser‚ however‚ came from a set-piece with Sirino’s freekick headed home by Kekana two minutes before the break.

After half-time‚ Sundowns took a 57th minute lead when Sirino played a brilliant through ball to marauding Tebogo Langerman‚ streaking down the left.

He‚ in turn‚ laid it up for Vilakazi to score and continue his return from serious knee injury.

Sundowns had already turned down the tempo when they got the third in the 69th minute with another good passing movement involving four different players and finished by a low drive from Sirino.

They then had several chances to add more goals with some woeful finishing before Manzini pulled the goal back to suddenly offer the relegation-haunted side a lifeline.

Then it was up to Mweene to make two brilliant saves in stoppage time to keep the points intact.