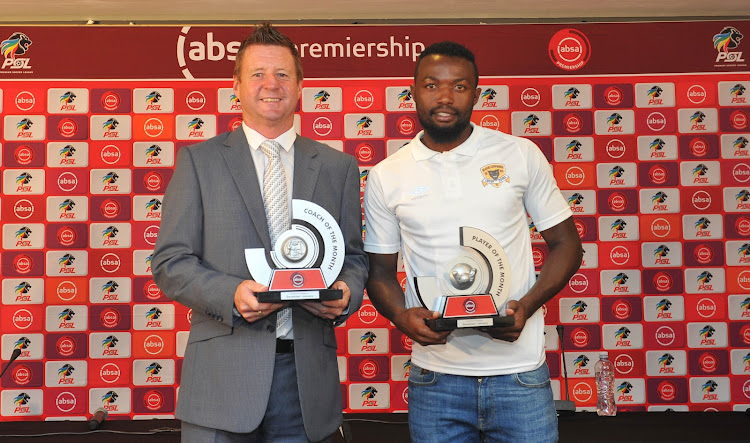 Black Leopards coach Dylan Kerr and his main striker – the Absa Premiership’s leading goalscorer‚ Mwape Musonda – were on Wednesday announced as the PSL’s coach and player for the block period of December and January.

Englishman Kerr‚ a former Arcadia Shepherds left-back‚ has only been in charge of Lidoda Duvha for just over two months‚ but has now impressively become the first Leopards coach in 10 years to win the accolade.

Kerr’s brilliant start at Leopards saw him winning three matches out of six since making his debut in a 1-0 home loss to log leaders Bidvest Wits (although he was not on the bench) on December 1.

Musonda’s form has also vastly improved under Kerr and the Zambian is now topping the league’s scorers’ chart with eight goals in 15 of the 17 matches played by his team so far.

“When somebody told me that I’ve got the award I was obviously very delighted having got it at such a short time‚” said Kerr‚ the former coach of Gor Mahia of Kenya and Simba SC of Tanzania.

“I didn’t want anybody to get carried away with it because even though we’ve done very‚ very well recently‚ we’ve won nothing yet.

“I want to keep it quiet and keep everybody’s mind on what we need to do week in and week out. It’s an honour to be given this award because before I came to Black Leopards everybody said I made a mistake and I was crazy.”

Musonda said he was as pleased as his coach when he heard he had won his award.

“It’s such an honour to be voted player of the month‚” said the former Orlando Pirates striker.

“Obviously when you go out to training you always want to be the best you can.

“When the hard work you’ve been putting in training and in games is noticed‚ it makes you happy and you even want to work harder.”

Kerr‚ who replaced Joel Masutha when Leopards were facing relegation in late November‚ said he is hoping to keep the team’s momentum going‚ and feels they might even finish inside the top eight.

“We just have to keep going the way we are‚ playing good football and enjoying the football and playing with a smile on the face‚” said Kerr of his 12th-placed side.

“But we have to be very‚ very careful on how we do it.

“I keep saying to the players. ‘We are taking baby steps and we are climbing the ladder and we are doing it our way’.”

The Leopards coach was asked what has been his secret in transforming the team in the very short time he’s been in South Africa.

“It’s from playing in South Africa and coaching in Africa. You’ve got to give players the respect and trust‚” he said.

“If you do that then the players will embrace what your ideas are. That’s something that we’ve done from day one… I’ve told them they need to be honest to me.

“That’s an important factor in African football‚ to let the players believe in what you want and what you want to do for them‚ because it’s not about me. I’m just there to pick the team and to get the best out of the players.

“The rest is for the players to respond and do what we are doing… and so far we’ve done that very‚ very well.”