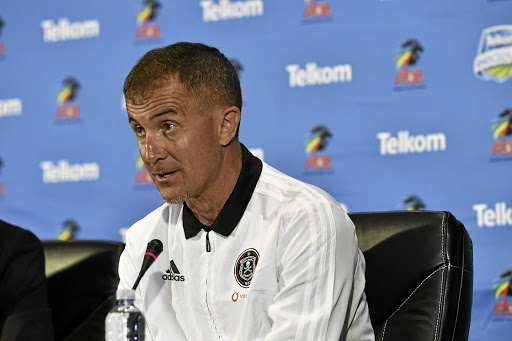 Orlando Pirates are back to the old days of coach Kosta Papic where they are praised for playing good football, but winning nothing.

Bucs have missed out on the MTN8, Telkom Knockout and Nedbank Cup this season.

Fresh from their Nedbank Cup exit - they lost 5-4 on penalties to Black Leopards at Thohoyandou Stadium at the weekend - they now only have the League and CAF Champions League to play for.

If they fail to win either of the two, they'd have gone five full seasons without a trophy. Pirates' last piece of silverware was the Nedbank Cup in 2014, which they won by beating Bidvest Wits 3-1 at Moses Mabhida Stadium in Durban.

In the 2005/06 season, they went unbeaten in their first 11 league games, but ended up finishing fifth under Papic.

In cups, they were beaten by rivals Kaizer Chiefs in the Absa Cup final. Ironically, Papic was replaced by none other than Sredojevic for the 2006/07 season, but the latter's stay was short-lived.

Now in his second stint at the club, Sredojevic's soul-healing mission for the supporters has not been a success, though they are playing some really good football week in and week out.

Naturally, Sredojevic was disappointed with the outcome in Limpopo.

"First of all, we are very disappointed and frustrated with the outcome of the game," he admitted.

"We are disappointed and we had the highest ambition in this competition. Huge frustration."

The former Uganda national team coach is not one to throw in the towel, though. He still believes that Pirates can convert their good football to trophies.

"In life, it's very important that after you are hit hard and you are frustrated, it's how you stand up and answer," he said.

"We go back to the drawing board to focus on the Champions League and the Absa Premiership," Sredojevic added.

Pirates will host Tunisia's Esperance at Orlando Stadium on Saturday in a Group B tie for Africa's premium club competition.