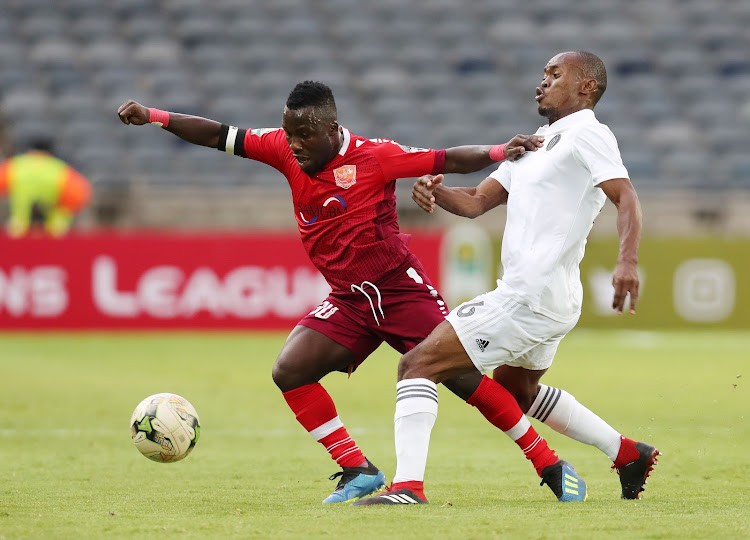 Mandela Ocansey (L) of Horoya is challenged by Asavela Mbekile of Orlando Pirates during the Caf Champions League match at the Orlando Stadium in Soweto on January 18 2019.
Image: Muzi Ntombela/BackpagePix

It might come as a surprise to some that there’s a soccer player in Guinea who uses the Mandela family name and Horoya AC captain Mandela Ocansey has explained how he got to be named after the internationally recognised South African last name.

"I was born on February 2 in 1990 the day it was announced (by FW de Klerk) that he (Mandela) would be released on the 11th of February.

“That’s where you can find the answer.

“My surname is linked with that‚” explained the player who scored in a 2-2 draw against Sundowns in Conakry last year.

Mandela was again a thorn to the Pirates rearguard in the first half of the Champions League group stage match played at the Orlando Stadium on Friday night.

But the Bucs finally managed to get the better of Horoya in the second half and comfortably won 3-0 to move to the summit of Group B.

Mandela‚ however‚ believes that they still have a chance to qualify for the last eight even though Pirates and reigning champions Esperance of Tunisia now have the advantage.

Esperance are also on four points after winning 2-0 in Tunis on Friday against Zimbabwe’s FC Platinum.

“Our mistake against Pirates was the mindset that we came with‚ that of saying we have never been defeated by a South African team home and away‚” Mandela said after their defeat to Pirates.

“The lesson we learnt is that we should never underestimate any team going forward.”

Horoya will face FC Platinum in Harare in their next match on February 2 while Pirates host Esperance in Orlando on the same day.

South African soccer legend Philemon Masinga will be laid to rest in a provincial official funeral in Klerksdorp in the North West on Thursday.
Sport
3 years ago