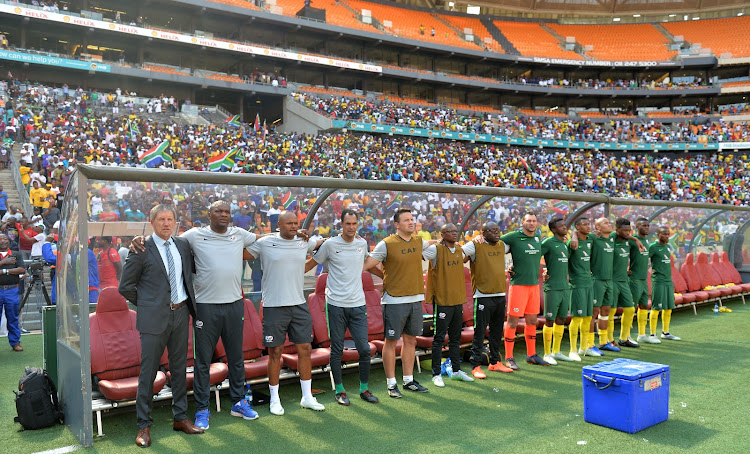 The Bafana Bafana bench during the singing of the national anthems before kickoff of their 2019 Africa Cup of Nations qualifier between South Africa and Nigeria at FNB Stadium in Soweto, south west of Johannesburg, on November 17 2018.
Image: Samuel Shivambu/BackpagePix

World football’s governing body Fifa has kept its views on the security situation in Libya as closely guarded as codes to a nuclear bomb‚ leaving it decidedly unclear when the north African country might have a ban on hosting international matches lifted.

The tenuous security situation in Libya has meant that for almost a decade now no matches under the auspices of Fifa or the Confederation of African Football (Caf) have been hosted in the oil-rich north African country.

Instead Libya’s national team‚ and its club sides competing in the annual Caf club competitions‚ have been forced to host their ‘home’ games at neutral venues‚ mostly in neighbouring Egypt and Tunisia but also occasionally in Mali and Morocco.

For South Africa this will be a persistent question over the next four months before Bafana Bafana travel away to face Libya for the last of their 2019 Africa Cup of Nations (Afcon) qualifiers.

South Africa need to avoid defeat in that game to book a place at the finals in Cameroon - after failing to beat Nigeria in their penultimate Group E qualifier at FNB Stadium on Saturday - and would obviously prefer a neutral venue rather than having to play in Libya.

The question of just when Libya can expect to have the ban lifted then is one that has been repeatedly asked of Fifa but without any definitive reply.

Libyan officials have been suggesting for years now that the lifting of the ban is just months away‚ but the practicalities seem a lot more complex.

It is known that Fifa have made several fact-finding trips to the country in recent years to see whether the ban can be lifted but Libya’s inability to get their own league up and running counts against them.

Libya is effectively a divided country‚ controlled by various tribal factions since the overthrow of late long-time president Muammar Gaddafi in 2011 with the central government having no control over large parts of the land.

The capital Tripoli is frequently the scene of gun fights between armed groups with the United Nations Support Mission in Libya (UNSMIL) reporting regular civilian deaths as a result of attacks and crossfire.

Libya’s league has played infrequently over the last eight years.

The kick off of seasons have been postponed several times‚ but the latest campaign was due to get underway last weekend again.

Some 24 teams are divided into two groups – one for the eastern side in Benghazi and one on the west in Tripoli.

The title is decided in a centralised playoff tournament.

Bafana Bafana may not be world beaters, but they have players who are being noticed and Percy Tau is one of them.
Sport
3 years ago

Nigeria were made to forget their Tokelo Rantie special deal as South Africa served up their new Percy Tau-Lebo Mothiba combo instead, Bafana Bafana ...
Sport
3 years ago
Next Article