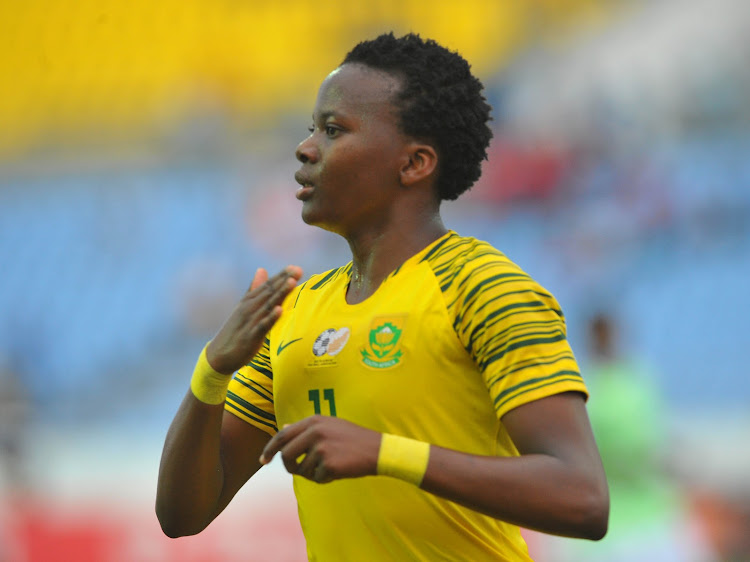 Banyana Banyana striker Thembi Kgatlana celebrates after scoring the only goal in a 1-0 win over Nigeria in South Africa's opening match of the African Women's Cup of Nation at Cape Coast Stadium in Ghana on November 18, 2018.
Image: Sydney Mahlangu/BackpagePix

Thembi Kgatlana scored a superb goal as South Africa got their African Women’s Championship campaign off to a dream start with a 1-0 victory over defending champions Nigeria in their Group B opener in Cape Coast‚ Ghana on Sunday.

The win is just a second ever over Nigeria for Banyana Banyana and gives them a massive boost in their bid to finish in the top three at the continental finals and seal a place at next year’s Fifa Women’s World Cup in France.

The decisive moment in the match came five minutes from the end when Kgatlana‚ sent off the bench as an impact player by coach Desiree Ellis‚ drilled a volley into the back of the net after being set up by Jermaine Seoposenwe.

It was a magical moment for Houston Dash star Kgatlana‚ and a winning goal that should give the side plenty of confidence in the remainder of the tournament.

The opening 20 minutes were cagey to say the least‚ with neither keeper tested. The first shot on goal in anger came from Refiloe Jane‚ who blasted a volley from the edge of the box high and wide.

Midfielder Mamello Makhabane then tried a speculative shot from 35-yards that flashed just wide‚ though Nigeria keeper Tochukwu Oluehi looked to have the ball covered.

Jane was unfortunate when she burst clear but was held back‚ though the match officials saw nothing wrong‚ while at the other end there was a big let-off when reigning African Women’s Footballer of the Year Asisat Oshoala fluffed her opportunity after she had seemed destined to score.

Janine van Wyk saw her free-kick saved by Oluehi‚ before Seoposenwe lost her balance at the vital moment with the goal gaping just before the break.

Seoposenwe had an even better opportunity five minutes after the break‚ but her touch from a cross put the ball inches wide of goal.

The pacey Kgatlana replaced Busisiwe Ndimeni just past the hour mark as coach Ellis sought to run at the Nigeria defence‚ but it was Leandra Smeda and Jane who had further unsuccessful efforts on goal.

There was a scare with 10 minutes remaining when Super Falcons star Desire Oparanozie had a headed chance that she directed over the crossbar.

But Kgatlana netted her 11th goal in 41 appearances for Banyana‚ another crucial strike in her collection of many to seal success for a jubilant South Africa.

Next up for Banyana is a clash against Equatorial Guinea on Wednesday‚ followed by a final Group B game against Zambia on Saturday.