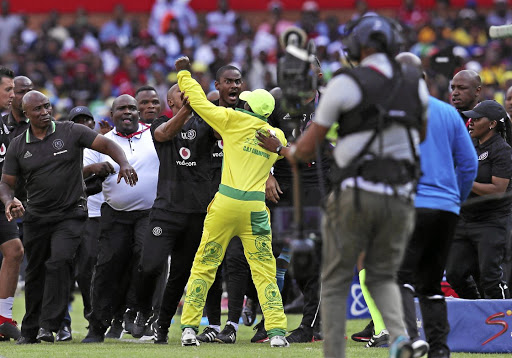 Soccer hooliganism has become one of the ugliest scenes ever to hit South African football of late following similar incidents at Loftus Versfeld in Pretoria and Durban's Moses Mabhida stadiums last season.

With Mamelodi Sundowns and Orlando Pirates locked goalless at Loftus Stadium in their epic Premiership clash last Saturday, the match was spoiled by the flaring of tempers, a behaviour that made a mockery of the spirit of sportsmanship.

The world is watching a nation in Africa that successfully hosted the 2010 Fifa World Cup, once again, turning itself into a laughing stock with the unsavoury incidents prior, during and after the game. A legacy is being eroded.

As I watched on the small screen I wondered whether the anger, which had reached extremity among all those involved, would be contained and the match restarted.

Flashbacks of the fans going berserk, damaging TV equipment, beating each other up and fighting security at the same Loftus Stadium in the aftermath of Sundowns' 6-0 drubbing of Pirates last term, tumbled back.

Pirates were handed a two-game stadium ban for the unruly behaviour.

The nasty scenes of the fans vandalising the Moses Mabhida Stadium during the Nedbank Cup match between Kaizer Chiefs and Free State Stars, which Chiefs lost earlier this year, played themselves out, once more.

Chiefs were penalised and ordered to play three games behind closed doors.

Serious concerns about the logistics, inadequate security, a chaotic ticketing system, late-coming and free entry of fans fuelled by foul-mouthed officials' statements, have been raised. I won't get into finger-pointing because I think that everyone is guilty of a misdemeanor or other.

It has become crystal clear that Mzansi football supporters have become a law unto themselves. Stakeholders, from the PSL, as custodians of the beautiful game, to the club chairmen, managers, coaches, security personnel and stadium management, have all dropped the ball, big time.

Over the years individual perpetrators of violence at matches have gotten away with murder, with no concrete action taken against them. However, every punishment in the book has been meted out to clubs. And that is where the problem lies.

In this day of evolutionary technology, where vile footage of the hooligans in action can be captured as evidence and is distributed until it goes viral on social media, the PSL, with the assistance of the clubs, must be able to identify and ban the scumbags for good.

After all it's their brands' and SA football's reputation that's being tarnished.

I mean, some of the rogues are card-carrying members of their clubs. Their particulars, such as ID numbers and addresses, are in the books of the clubs. I've heard on numerous occasions clubs saying "this is a police matter". The over-reliance on the police has proven ineffective.

Even after arrests and charges or imprisonment, it is incumbent upon the clubs to ban those found guilty from ever setting foot at stadiums.

Being barred for a lifetime from watching their soccer heroes would hit them where it hurts the most.

As things stand, there are no consequences whenever they break the law.

Official statements merely condemning the violence have not worked. If it means life bans, so be it.