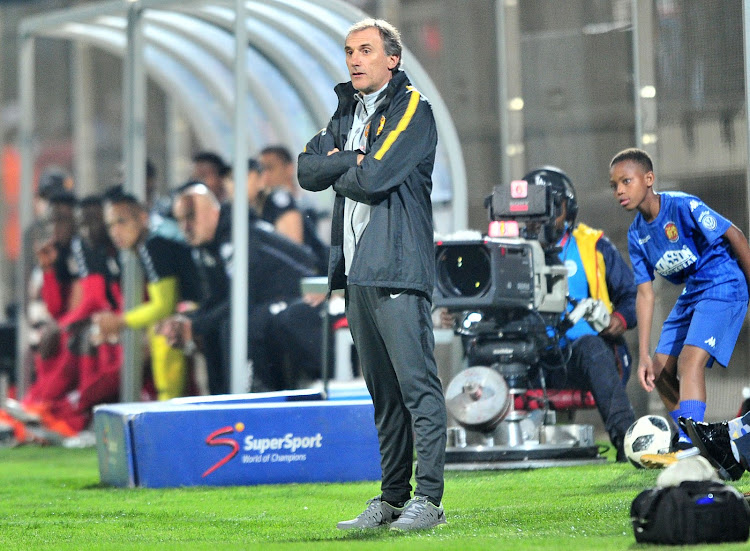 Giovanni Solinas refused to use the absence of a 12th man as an excuse for Kaizer Chiefs’ loss to Polokwane City in Durban on Sunday although it was obvious their flat attack could have done with a lift.

Chiefs were beaten 1-0 behind closed doors as they began the first of an effective two match suspension at the Moses Mabhida Stadium following the horrific scenes of rioting in April when Free State Stars beat them in the Nedbank Cup semi-final.

Saturday’s performance would have been as frustrating for the fans had spectators been on the hand‚ but there is also the chance they might have lifted Chiefs up a required notch or two.

“Excuse me‚ I don’t want to speak about the (lack of) support.

"We didn’t lose the game because there weren’t any supporters. I don’t want that to be an excuse‚” was his immediate response after the game.

“It wasn’t an easy game. In the second half the guys were very positive‚ in the first half no.

“The manner of our attack didn’t work because they gave us space behind their defence but we didn’t exploit this space. We didn’t lose our markers and we were too static in the first half.

“But in the second half‚ in my opinion‚ the guys performed well but sometimes this happens in football that they create one chance and win the game. Congratulations to Polokwane for their victory.

“I’m not happy with our first half performance but satisfied with the second half‚” he insisted.

It was also a second game in a row without a goal for Chiefs‚ after a goalless tie with Highlands Park in Tembisa on Tuesday.

“Two matches without a goal is not a problem.

"I’m sure the goals will come because the team play attacking football. We showed that today by pressing and pushing back the opponent. We created the chances.

“It’s a pity we lost this game before the FIFA break because I had hoped we would go into the break with good morale .. in a good mood‚” he added.

Kaizer Chiefs’ slogan‚ dating back to their hippy origins in the 1970s‚ is “Love and Peace”‚ and there is a lot of love going around at Naturena at ...
Sport
2 years ago
Next Article