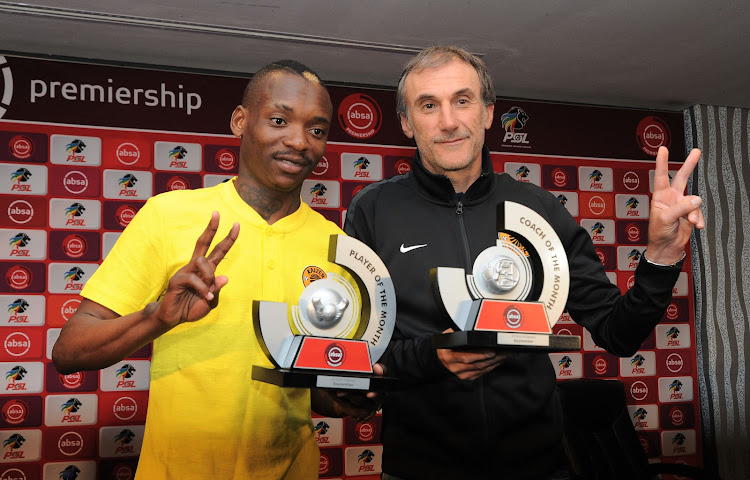 Khama Billiat and Giovanni Solinas,of Kaizer Chiefs during the Absa Premiership 2018/19 Coach and Player of the Month for September Announcement at the PSL Offices, Johannesburg on 04 October 2018.
Image: ©Aubrey Kgakatsi/BackpagePix

Kaizer Chiefs’ slogan‚ dating back to their hippy origins in the 1970s‚ is “Love and Peace”‚ and there is a lot of love going around at Naturena at the moment between coach Giovanni Solinas and his star player Khama Billiat.

The two won the Absa Premiership’s awards for Coach of the Month and Player of the Month at the Premier Soccer League (PSL) offices in Parktown on Thursday‚ where Billiat expressed his love for his coach‚ which he said was mutual.

The Zimbabwean was responding to a question on Solinas having on two occasions bowed to Billiat as the nimble playmaker left the field this season.

Both those occasions came in the month of September that saw Chiefs earn three wins from four PSL matches‚ and Solinas and Billiat their awards.

The coach performed small‚ appreciative bows to Billiat when the player was substituted off in a 2-0 away win against Free State Stars‚ then again when he was taken off in the dying minutes in Amakhosi’s following 2-0 home win against AmaZulu.

“I’m grateful to have a coach like him. But most importantly it’s about the team‚” Billiat said.

“We all know him. He’s always like that to everyone at training.

“So I don’t see something special – he’s always like that.

“I’m grateful for the love that he has for me and I love him too – just like everyone [at Chiefs].

“I love the relationship that I have with him.”

Billiat has scored five goals – three in the league and two in the MTN8 – for Chiefs in 2018-19‚ where the 2015-16 PSL Player of the Season signed on a free transfer from Mamelodi Sundowns in June.

Solinas has on more than one occasion gushed of his playmaker as the best player in the league‚ too good for the PSL and someone who should be playing in Europe.