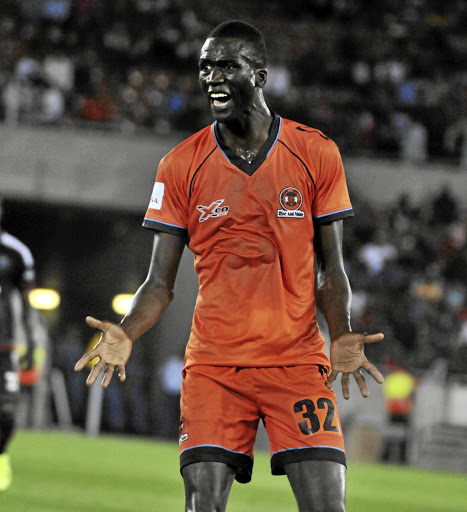 Polokwane City terminated Senegalese striker Faye Baptiste's contract in 2016 and could now face the wrath of world governing body who, according to Safpu, has told the club to pay R1-million.
Image: Philip Maeta/ Gallo Images

Limpopo side Polokwane City could find themselves in hot water with Fifa for failing to compensate Senegalese striker Faye Baptiste.

Sowetan is in possession of correspondence between Fifa, SA Football Players' Union (Safpu) and Polokwane City, through their lawyer Claudio Bollo. It would appear there hasn't been a response from Rise and Shine, who were ordered to pay Baptiste over R1m, according to Safpu.

In a similar case, AmaZulu were recently docked six points for failing to pay Namibian player Phineas Nambandi, after terminating his contract in 2014.

Usuthu have relented, and paid R1.5m earlier this week to avoid being relegated.

Now City also find themselves in the wrong books of Fifa and risk punishment by the football authority. City signed Baptiste in 2015 on a two-year deal but terminated his contract the following year.

He played three matches against Orlando Pirates, Chippa United and SuperSport United, all in September that year, and failed to score. The matter was taken to Fifa's players status committee and it was ruled in July 2017 that City must compensate him.

Safpu secretary-general Nhlanhla Shabalala confirmed yesterday that the matter is now headed to Fifa's disciplinary committee and City could be docked points, though the matter may take sometime to be finalised - the same way AmaZulu's case took four years. 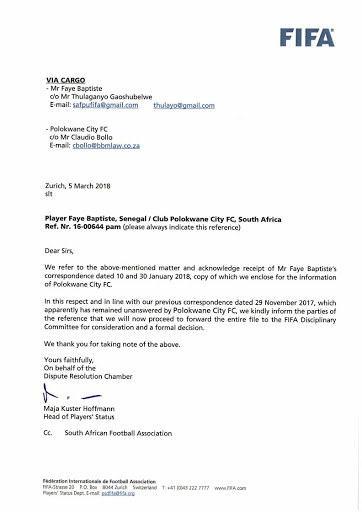 One of the letters addressed to City from Fifa's Zurich headquarters in March this year.

"Polokwane City terminated his contract on the basis that he does not fit in their plans. Clubs have the right to recruit who they want given how they play and all the dynamics, but in the process that you want to end the relations with the players - the players are not animals; they are not monkeys or dogs, but human beings. So just as much as you sat down, negotiated and concluded a deal, the same applies when you want to end things," Shabalala said.

"Now we've got an award and Polokwane City must pay the money, which is in the region of R1-million."

Polokwane were allegedly late in writing a letter to Fifa to request the grounds of the decision taken, which would have allowed them to lodge an appeal.

As it stands, it's not clear when Fifa's DC will deal with the matter and it's therefore, not known when City would be docked points if they don't comply.

Attempts to reach Polokwane City management for comment were not successful.