Hunt versus Mosimane one of SA football's great coaching rivalries 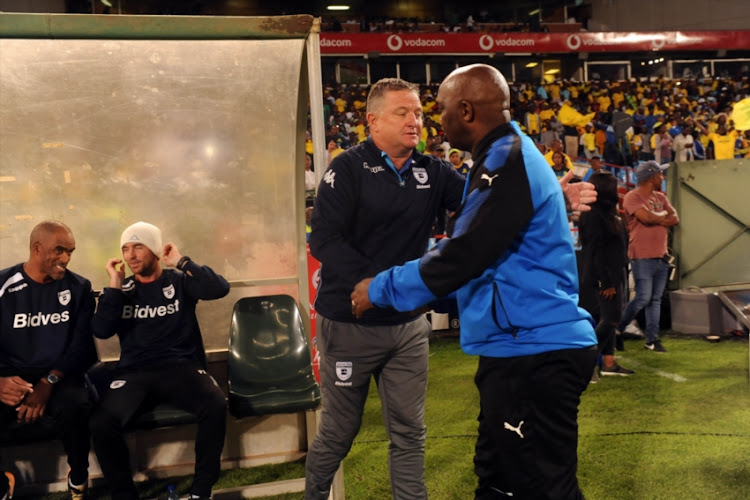 As top coaches Gavin Hunt and Pitso Mosimane prepare to go head-to-head in Atteridgeville on Sunday‚ this time with Bidvest Wits the early-season leaders and Mamelodi Sundowns the defending champions‚ both have been warning of the capability of the other.

Wits have 16 points from eight games in the Absa Premiership‚ which is six more than Sundowns‚ who have played two games less.

Sundowns are the only unbeaten side left in the season but drawn have four games‚ while Wits go into the clash on the back of a 2-0 away win in Cape Town on Tuesday.

“We will have to be careful after Murray showed us how he was able to dribble through the Cape Town City defence like that on Tuesday and score‚” Sundowns’ coach said.

“They are a very professional side‚ well organised with a very good coach. You know Gavin; when he has the advantage he doesn’t give it away. He can take the game by the scruff of the neck.

“We have to do more than what we did against Bloemfontein Celtic and we won’t get the same amount of space that we did in that match. They’ll be on top of us.”

Hunt feels it is an important moment in the season‚ and for his club’s title ambitions.

“After the two games we played against Maritzburg United and Polokwane City‚ we should have got maximum points and opened up a lead at the top of the table and we would have been well clear‚” he said.

“We had planned for a point away against Cape Town City and a point on Sunday‚ but we got three against City so must go and get something also on Sunday.

“Sundowns have the best squad in the country‚ the best players … no doubt … man-for-man.

“So‚ what are we going to do? For a start‚ we won’t get many chances so we’ll need to be clinical. We need to improve our set pieces too‚” he added.

Two victories for Sundowns over Wits last season‚ both home and away in the last league campaign‚ hands Pitso Mosimane the morale high ground as he again goes up against an old coaching nemesis.

The pair first came across each other as opposites on the field during their playing days.

Mosimane completed a double over Hunt last season when Sundowns beat Wits 2-0 both home and away and went onto clinch their third title in five years under Mosimane.

But in the head-to-head between the pair Hunt is still ahead with 10 wins to seven for Mosimane in 23 past clashes. They have shared six draws.

Mosimane’s first win came after nine games without success against Hunt when Katlego Mphela scored the only goal for SuperSport United against Moroka Swallows in January 2007.

While there is a keen rivalry it is also obvious that there is a mutual respect‚ even if the two coaches have appeared to have lost some conviviality in recent years.

When Mosimane was first in charge of the national team in 2007‚ holding down the job while Carlos Alberto Parreira was working out his contract‚ he invited Hunt to travel with SA as an advisor for a key African Nations Cup qualifier against Zambia in Lusaka.

South Africa won that game 1-0 for one of their best ever away results.