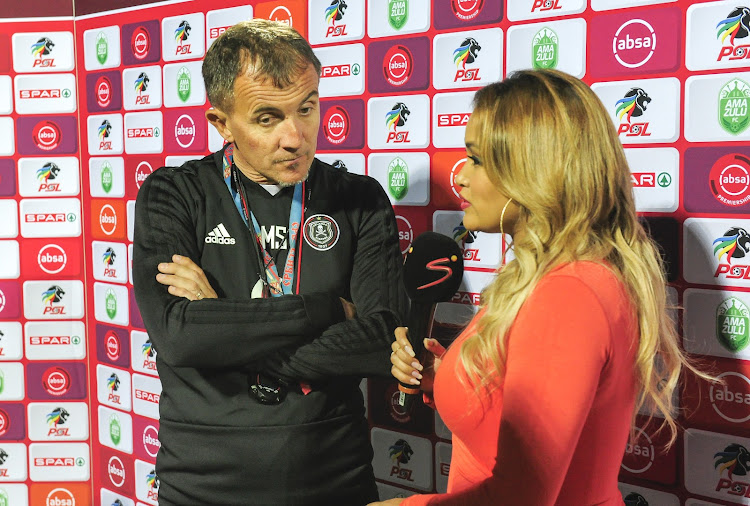 Pirates dominated the first half‚ then the second was a toe-to-toe slugfest of opportunities at either end.

Sredojevic's only complaint was that his strikers had not been more clinical taking chances. Justin Shonga‚ especially‚ could have had a second-half hat trick‚ including hitting the upright.

"First of all‚ for a good match you need to have two good opponents who come with an intention to play football‚" Sredojevic said in his post-match interview with SuperSport.

"Credit to coach Cavin Johnson and his team and to this wonderful atmosphere of the people who came here.

"My team had a very good first half where we did everything that we agreed on. And when you look at the difference between the first and second half‚ we absolutely controlled the game [in the first]‚ not allowing the opponent the ball.

"We didn't give away turnovers and allow them to outnumber us when we lost the ball.

"In the second half it was like two boxers dropping their guard and punching each other‚ chance for them‚ chance for us.

"I believe that we have been a bit closer for that [to winning‚ than AmaZulu]. Unfortunately it was not to be.

"This was a very good advertisement for the game. I think football of this kind invites people to come to the stadiums.

"Good to watch‚ but for us as the coaches much more effectiveness in front of goal could be a factor in putting sugar into the tea‚ and help us to win the game.

"So we wanted more. In the end‚ I believe that even a draw we will accept and look forward to‚ during this Fifa break to prepare ourselves for the big derby."

Pirates return from the coming Fifa international date with the Soweto derby‚ hosting Kaizer Chiefs in a Bucs home game at FNB Stadium on Saturday‚ October 27.

Kaizer Chiefs’ slogan‚ dating back to their hippy origins in the 1970s‚ is “Love and Peace”‚ and there is a lot of love going around at Naturena at ...
Sport
3 years ago
Next Article