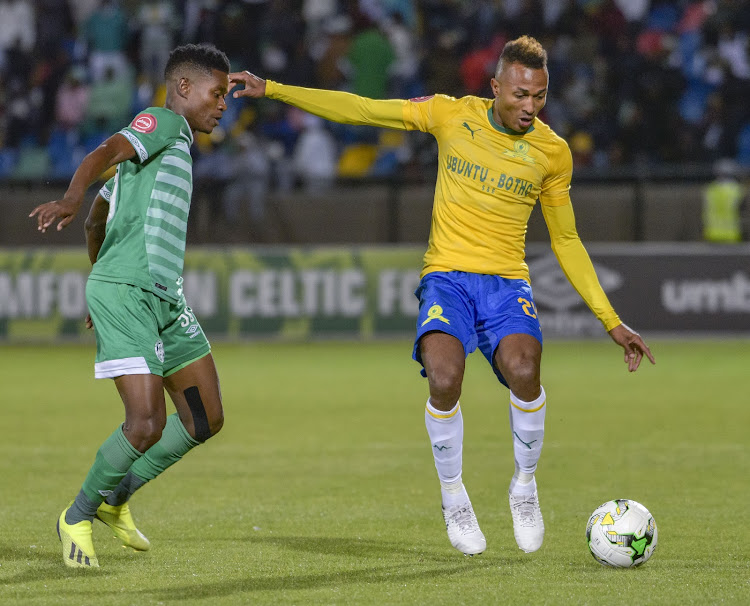 Champions Mamelodi Sundowns had a late effort controversially disallowed as they were held goalless at Bloemfontein Celtic and although remain unbeaten will see it as points dropped at the Molemela Stadium on Wednesday.

Lebogang Maboe put the ball into the net with just seven minutes to go but the effort ruled offside as Themba Zwane was said to be interfering in an offside position by linesman Edward Madidilani.

But Zwane looked rather to be trying to get out the way and the decision was criticised by Sundowns coach Pitso Mosimane after the match.

“He was not interfering, he didn’t touch the ball. We won the game, it’s sad,” he said.

Sundowns, who have now drawn four of their opening six games of the league season, started the match with a one-sided record away in the City of Roses, having not lost an away game to Celtic since February 2006 a total of 13 games.

And, that one-sided statistic did look under any threat as they dominated the proceedings, pressing Celtic into errors when the home side had the ball and also keeping the bulk of possession as they varied the tempo of the game and sprayed passes onto both flanks, where they attacked the Celtic defence.

Toni Silva headed against the crossbar after being fed a cross from the left by Phakamani Mahlambi as early as the 10th minute and two minutes later a long range effort from Sundowns’ skipper Hlompho Kekana had to be turned around the corner by Celtic’s ‘keeper Patrick Tignyemb.

Celtic’s strategy was to look for counter attack opportunities and use the space behind Sundowns’ fullbacks, who were consistently marauding forward.

They had such an opportunity after 22 minutes when Tebogo Langerman was caught out of position, allowing Ndumiso Mabena to get in a shot from an acute angle.

Denis Onyango not only stopped that effort but then immediately made another fine save from the rebound as Lantshene Phalane fired in a rasping effort that was goal-bound until the keeper caught it superbly.

Ronald Pfumbidzai, shifted to centre back after Alfred Ndengane’s sale this week to Orlando Pirates, gave away a freekick on the edge of the Celtic box 10 minutes before half-time but M,ahlambi wasted the set piece opportunity.

Immediately after the break, Mahlambi again set up Silva for a header right in front of goal that he completely missed.

It took until the 70th minute for the game to come alive after a pedestrian spell from the interval onwards with Onyango saving well from Lorenzo Gordinho’s header at the end of a freekick from Menzi Masuku.

Three minutes later there was another counter that Masuku played through for substitute Tebogo Potsane, who had just the keeper to beat but went wide from a tight angle.

But Celtic’s gutsy showing saw them merit a share of the spoils even if all the stats were lobsided in favour of Sundowns.

“We put in a good shift and we are happy with the result,” smiled their coach Steve Komphela afterwards.